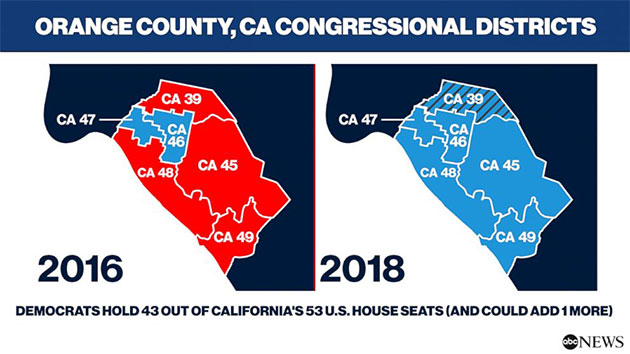 ABC News(NEW YORK) — From Orange County, California, to rural Maine, to the congressional district that's home to one of President Donald Trump's golf courses, the Democratic majority that will preside over the 116th Congress will claim members from areas of the country once thought of as impenetrable bastions of conservatism and Republican dominance.

While the laborious task of counting mail-in ballots delayed projections in many key California races, what once was a possibility has now become a reality for the GOP: they will have zero congressional representation in Orange County, once described by President Ronald Reagan as the place "where the good Republicans go to die."

"Good Republicans," "Country Club Republicans," "Chamber of Commerce Republicans," whatever name is applied, in 2018 the GOP saw substantial losses in areas that birthed many of the figures and ideas that defined the modern conservative movement in America, seeing a sizable block of voters recoil at the tone and tenor of Trump, while Democrats were determined to register their disapproval of the commander in chief.

"The results of the midterm show a continued disappearance of regional power by the GOP, as it becomes more and more centered in the South and rural America," ABC News Chief Political Analyst Matthew Dowd said. "It shows a continued homogeneity of the GOP where differences among the GOP caucus become fewer and fewer and looks less and less like America as a whole. Moderate GOPers have all but disappeared. So it not only becomes geographically concentrated but ideologically and demographically as well. It also means the possibility of nominating a candidate from either coasts or from urban areas is diminished."

Prior to Clinton's narrow win in Orange County in the 2016 election, the area had not sided with a Democratic presidential candidate since 1936, when President Franklin Roosevelt was elected to a second term.

Republicans also lost a seat partially located in the state's traditionally conservative Central Valley, and another in southern California, where Rep. Steve Knight, the only Republican representing any part of Los Angeles County in the House, lost to Democrat Katie Hill.

When Congress is sworn in next year, Republicans will hold just eight of California's 53 U.S. House seats, or 15 percent of the congressional delegation in a state with nearly 40 million residents.

Half of New England re-elected their Republican governors in 2018, but after GOP Rep. Bruce Poliquin was defeated by Democrat Jared Golden in Maine's 2nd Congressional District on Thursday (in part due to the state's implementation of ranked-choice voting) there will be exactly zero U.S. House members representing the region.

Come January 2019, Maine Sen. Susan Collins will be the only Republican Member of Congress from New England.

In New Jersey, a state that elected and re-elected a Republican governor twice this century, Democrats flipped four U.S. House seats in 2018, leaving Rep. Chris Smith as the only Republican-member of the state's 12-person congressional delegation. In the state's 11th Congressional District, Democrat Mikie Sherrill won the seat held by the retiring Republican chairman of the powerful House Appropriations Committee, a seat that had been in Republican hands since 1985.

Democrats all flipped seats in suburban Atlanta and Chicago that once belonged to two former Republican House speakers, Newt Gingrich and Dennis Hastert, as well as the suburban Houston seat that was once held by former President George H.W. Bush.

"America used to be a country of regional parties within each party, while both parties are on the path of losing this important representation, the path of the GOP is nearly complete to a nationalized ideological right-wing party," Dowd said.

According to ABC News' current count, Democrats have a net gain of 37 seats in the U.S. House, with 2 races still undecided.

The Democratic Congressional Campaign Committee (DCCC) trumpeted their work in California early and often this cycle, spending millions in the primary to ensure they got their candidates through the state's "Jungle Primary" system where the top two candidates advance regardless of party.

It was a move that ultimately appears to be paying large dividends.

"The DCCC responded to this threat immediately in January 2018, conducting a thorough data analysis to determine the strongest and weakest candidates – both Democrats and Republicans – and working to consolidate the Democratic primary fields," DCCC regional press secretary Andrew Godinich wrote in a post-election memo recapping the DCCC's California strategy.

But beyond surviving a unique primary system, the candidates that advanced and ultimately scored Democrats some of their most high-profile victories in traditionally conservative strongholds largely portrayed themselves not as partisans, but as pragmatists.

Rouda, a former Republican and real estate developer, called for a "return to the middle" throughout his campaign.

Sherrill, a former helicopter pilot in the U.S. Navy, joins a host of female veterans like Pennsylvania's Chrissy Houlahan, Virginia's Abigail Spanberger and Michigan's Elissa Slotkin, who all won victories in Republican-held seats in 2018, focusing both on their backgrounds and the issue of healthcare, a central part of the Democratic Party's messaging.

In one of the cycle's most impactful television advertisements, Slotkin highlighted her mother's struggles with the American healthcare system after a diagnosis of stage 4 ovarian cancer that eventually took her life, using footage of her Republican opponent Rep. Mike Bishop celebrating the House GOP's vote to repeal the Affordable Care Act (ACA) in 2017.

Golden, a state legislator and veteran of the U.S. Marine Corps, ran on a platform of protecting Social Security and Medicare against an opponent that also voted to repeal the ACA.

While Democratic victories in areas once considered hallowed conservative garnered the most attention, on a macro-level, the party also outperformed the GOP in state's won by Donald Trump in the 2016 presidential election.

According to an analysis by ABC News, while Republicans won just 36 of the 188 (19 percent) congressional seats in states won by Hillary Clinton in 2016, Democrats were able to capture 79 of the 245 seats (32 percent) up in states Trump won in 2016.

Democrats also now hold either a majority of or half of the congressional seats in three Trump-won states: Arizona, Iowa and Michigan.

The new Democratic majority also boasts representation from traditionally Republican states like Kansas, Oklahoma and South Carolina, which all backed Trump by wide margins and entered this cycle with all-Republican congressional delegations.

But while those seats will likely return to the top of the GOP-target list in 2020, the ability of the party to compete in places like Orange County and the Northeast, at least in federal races, is in serious doubt.