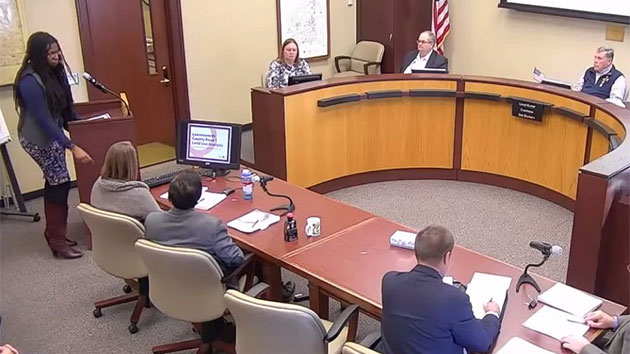 Leavenworth County Board of County Commissioners
Posted on November 18, 2018 by ABC News

Leavenworth County Board of County Commissioners (NEW YORK) — The governor of Kansas is demanding the resignation of a white county commissioner who claimed he was "part of the master race" when talking to an African-American consultant during a public meeting last week.

Gov. Jeff Colyer is asking Louis Klemp, chairman of the Leavenworth County Board of Commissioners, to step down following his "inappropriate remarks" made during a public meeting on Nov. 13.

"Racial and discriminative language have no place in our society, and most especially when spoken by someone holding a public office," Colyer said in a statement. "The inappropriate remarks made by Leavenworth County Commissioner Louis Klemp are unacceptable and do not reflect the values of the county which he represents. As such I call on him to step down as county commissioner."

During a public meeting on Tuesday, Triveece Penelton, a consultant for VIREO Planning Associates in Kansas City, was making a presentation to the board of commissioners about community engagement on a potential development of rural land in Tonganoxie, Kansas.

In a video of the meeting, posted on the Leavenworth County Board of Commissioners' YouTube channel, Klemp expressed his displeasure with a plan to develop the land as residential. He said he favored an industrial development that would return revenue to the county.

Speaking directly to Penelton, Klemp said, "I don’t want you to think I'm picking on you because we're part of the master race. You know you got a gap in your teeth. You're the masters. Don’t ever forget that."

Klemp did not explain what he meant by the comment.

Klemp did not respond to requests for comment Sunday from ABC News.

Penelton also could not be reached for comment on Sunday.

Leavenworth County Administrator Mark Loughry issued a statement defending Klemp, saying the commissioner was referring to a gap in his own teeth and noting that Penelton had a similar gap.

"The use of the term 'Master Race,' as ill-advised as it may be, was not a reference to Nazis or used in a racist manner in this instance," Loughry said in a statement. "Leavenworth County has a zero tolerance for racism or discrimination in any form from any staff members. I am deeply sorry that one misconstrued comment by a member of our elected governing body has caused so much grief, sorrow and hatred."

But Robert Holland, one of Klemp's colleagues on the commission, said Klemp needs to be disciplined.

Holland said he is considering a motion to remove Klemp, whose term on the board runs through Jan. 15, from being chairman of the board.

Meanwhile, the Leavenworth City Commission held a special meeting on Thursday and issued a statement condemning Klemp's remark and asked that he apologize and step down.

"These comments have resulted in widespread negative attention and have harmed the overall perception of residents, businesses, cities, organizations and agencies in Leavenworth County," the Leavenworth City Commission said in its statement. "The City Commission unequivocally denounces the use of 'master race' or any other language that has historic ties to racism, division and bigotry in any setting at any time."

‘Suge Knight and the Murders of Biggie & Tupac’, Halle Berry on Black progress in Hollywood, and more
With omicron in Colorado, ‘last thing that we want is another wave,’ governor says
Member of ‘Jena Six’ speaks out on race and the justice system 15 years later
Gov. Wolf vetoes bill for concealed carry with permit
Authors of color speak out against efforts to ban books on race
Biden declines comment on report Trump tested positive for COVID days before debate