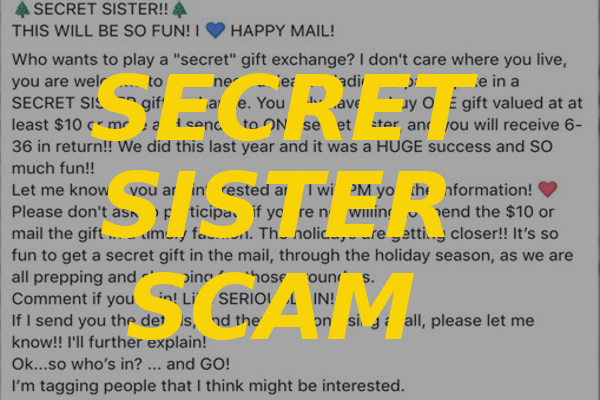 Pennsylvania – If you see posts on social media inviting you to take part in a Secret Sister exchange, ignore it.

The posts on Facebook and Instagram promise that, if you buy one gift and mail it to a stranger, that you will get in return as many as 36 gifts back.

However, this is just a new version of an age-old scam or a pyramid scheme. People who signed up early might actually get a few gifts, but the vast majority of people who send a gift will never get anything in return… and your personal information and address could be spread around.

From a mathematical standpoint, the scam also doesn’t make sense. In order for the Secret Sister exchange to deliver what it promises, it would take Santa Claus himself! By the time the hoax would get to the 11th round of gift sending, every person in America would have to participate for it to work.

There’s another problem with the Secret Sister exchange… it’s illegal. It not only violates the federal lottery statue by promising to deliver a big payout, but it also violates state anti-pyramid scheme laws. 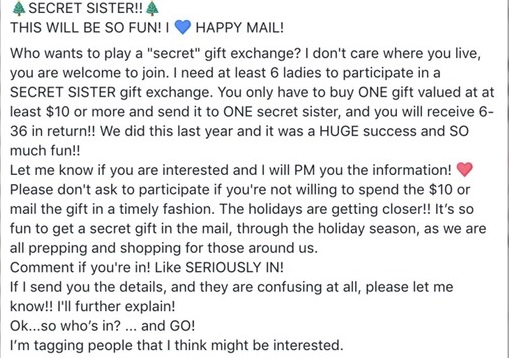 If you still like the idea of exchanging gifts, do it the old-fashioned way… with a Secret Santa exchange with people who you actually know.

Or if you like the idea of exchanging surprise gifts with strangers, the website Reddit is doing its 9th Reddit Gifts Secret Santa exchange. Although they cannot promise that you will get a gift, more than a million packages have been successfully sent and received over the past years from participants from more than 220 countries. If you’d like to be a part of it this year, visit redditgifts.com. The deadline to sign-up is the morning of Nov. 26.

Keep in mind that with both a traditional Secret Santa and the online Reddit exchange, you will only receive one gift. What makes the Secret Sister exchange a scam is that it promises that you will receive multiple gifts for every one gift that you send.