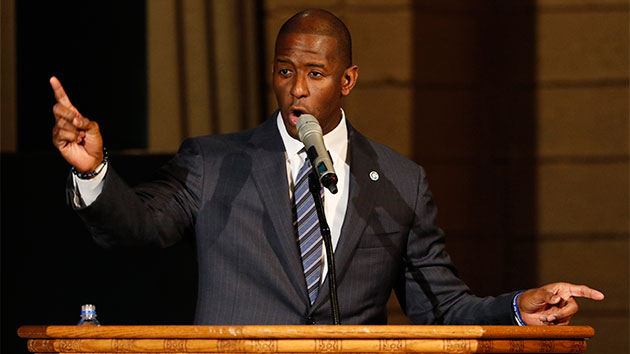 Gillum, a Democrat who is mayor of Tallahassee, announced live on Facebook shortly before 5 p.m. that he was formally ending his candidacy.

"I want to take a moment to congratulate Mr. DeSantis on becoming the next governor of the great state of Florida," Gillum, who was accompanied by his wife, said.

"This has been the journey of our lives," he said in the video. “Although nobody wanted to be governor more than me, this was not just about an election cycle. This was about creating the kind of change in this state that really allows the voices of everyday people to show up again in our government.”

Late Saturday, DeSantis said during a Fox News interview that “I was never really in danger because my margin was big enough … Now I can go forward without having to worry about this.”

A few hours before Gillum conceded, President Trump congratulated Gillum for running a "really tough and competitive race for Governor of the Great State of Florida."

"He will be a strong Democrat warrior long into the future – a force to reckon with!"

Gillum said he waited until the "last vote was counted."

"We wanted to make sure every single vote … as long as it was a legally cast vote, we wanted it to be counted," he said.

The concession for Gillum brought an end to a bitter and contentious battle with DeSantis.

The Trump-backed Republican said at a rally during the campaign that Gillum would appoint "Soros-backed activists" to the statehouse if he had won. And DeSantis was criticized after saying during an interview on FOX News that voters should not "monkey this up" by voting for Gillum — a remark believed by many to be racist.

Gillum was also the target of racist robocalls paid for by a white nationalist group from Idaho, which impersonated Gillum in an exaggerated accent and referred to the Democratic Tallahassee mayor as a "negro" and a "monkey."

"Well, hello there. I is the negro Andrew Gillum and I'll be askin' you to make me governor of this here state of Flordia," the call says. DeSantis denounced the calls and said he didn't know who was making them, although the group from Idaho made similar robocalls mocking California Democratic Sen. Diane Feinstein.

On Election Night, Gillum had conceded when DeSantis' lead seemed insurmountable. He withdrew the concession a few day later.