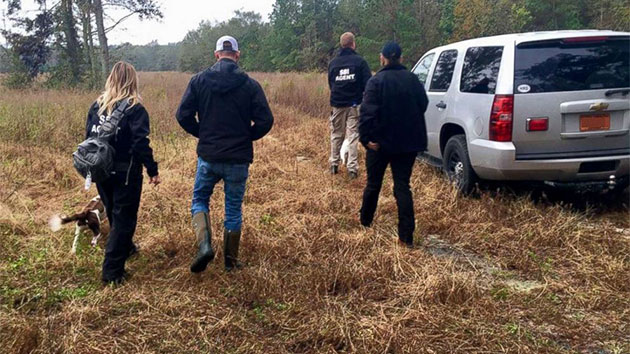 FBI Charlotte(WASHINGTON) — Authorities are asking residents in North Carolina's Robeson County to check their properties this weekend for "anything unusual or out of place" amid the ongoing search for kidnapped 13-year-old Hania Noelia Aguilar.

"If you see something that doesn’t belong or is not normal, do not touch anything (you could damage possible evidence) and call the tip line or 911," the Lumberton Police Department wrote in a Facebook post Friday night. "You know your property best and can most easily determine if something is worth contacting law enforcement to help us."

Hania was kidnapped just before 7 a.m. local time on Nov. 5 outside her home at the Rosewood Mobile Home Park in Lumberton, a city in Robeson County, according to police.

She had grabbed her aunt's car keys that morning so she could turn on the vehicle before school. That's when a witness saw a man clad in all black with a yellow bandanna over his face approach the girl and force her into the green, 2003 Ford Expedition, police said.

The suspect then drove away in the family's SUV with Hania inside, police said. The stolen vehicle was located several miles away on Quincey Drive three days later, but Hania was nowhere to be found.

The FBI, which has named Hania's disappearance its "Most Wanted: Case of the Week," announced Tuesday that it had raised its reward to $25,000 for information on the case. The state of North Carolina is also offering a reward of up to $5,000, bringing the total possible reward amount to $30,000.

"I trust in God that my daughter will return," Hernandez wrote. "No one knows the pain I have in my heart. Despite all the criticism and speculation against me, I would never use my daughter’s name in order to take advantage of this situation. I thank all those people who have provided me help.

"Please," she continued, "if you know something, call. I ask everyone not to make absurd comments. For the love of God respect my pain. I only want Hania, my princess, back. I miss her."

The FBI subsequently posted a statement on Twitter in support of Hania's mother.

"Social media can be cruel. Hania Aguilar is still missing. Her Mother wrote this note to ask people not to say such mean things on social media. Support this Mother, her daughter was kidnapped," the FBI's field office in Charlotte tweeted Tuesday night.

Investigators are still trying to track down a man who was seen in surveillance footage walking in the neighborhood that Monday morning, around the time Hania was abducted. The three videos, which the FBI released earlier this week, show the unidentified man wearing light-colored shoes, a light-colored shirt and a hoodie.

The man is not considered a suspect or person of interest at this time. Rather, he's someone authorities "want to speak with" because he may be able to help investigators narrow down a timeline of Hania's kidnapping, according to FBI Supervisor Andy de la Rocha.

Authorities are seeking additional surveillance footage from anyone who lives or owns a business on or near Quincey Drive.

Hania is described as a Hispanic girl who is 5 feet tall and weighs about 125 pounds, according to the FBI. She has black hair and brown eyes and was last seen wearing a blue shirt with flowers and blue jeans.

Authorities have set up a special tip line that anyone can call if they have information to help investigators find Hania: (910) 272-5871.