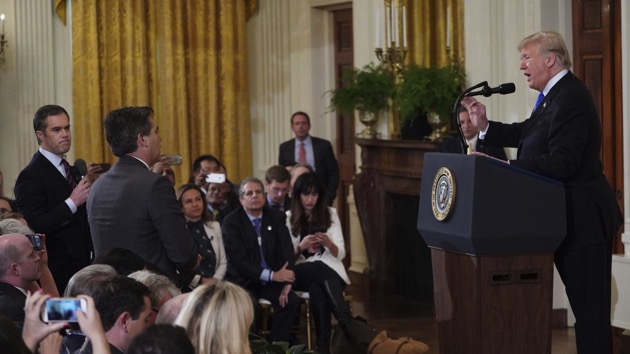 MANDEL NGAN/AFP/Getty Images(WASHINGTON) — A federal judge on Friday ordered the Trump White House to immediately restore the press pass of CNN Chief White House Correspondent Jim Acosta as the case progresses after the network filed a lawsuit suit claiming that revoking it violated the First Amendment.
The judge repeatedly emphasized that his decision was based on the Fifth Amendment and that Acosta was denied his right to due process.
"If at some point after restoring the hard pass the government would like to move to vacate the restraining order on the grounds that it has fulfilled its due process obligations then it may, of course, do so and I will promptly address that and then the remaining basis of the (temporary restraining order)," U.S. District Judge Timothy J. Kelly said.
Speaking after the ruling, Ted Boutros, an attorney for CNN said the news organization is "Extremely pleased with the ruling today."
"A great day for the First Amendment and journalism," he said. "We're very excited to have Mr. Acosta be able to go back and get his hard pass and report the news about the White House."
Acosta thanked journalistic colleagues for their support and the judge.
"Let's go back to work," he said.
CNN and Acosta filed suit against President Donald Trump and top aides on Tuesday for stripping Acosta, without warning, of his access to the White House, where he works daily. The indefinite revocation of Acosta’s press credentials, known as a “hard pass,” came on the heels of a heated exchange between Trump and Acosta on Nov. 7.
CNN and Acosta filed an emergency motion to have Acosta’s press pass immediately reinstated as the court case continues and asked for a ruling from Trump-appointed U.S. District Judge Timothy J. Kelly in federal court in Washington Wednesday afternoon.
Copyright © 2018, ABC Radio. All rights reserved.