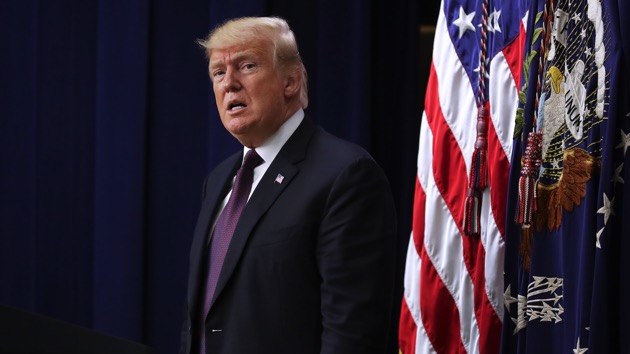 Chip Somodevilla/Getty Images(WASHINGTON) — President Donald Trump said Friday he has finished his written answers to special counsel Robert Mueller for the investigation into Russian interference in the 2016 election, but told reporters he has yet to submit the answers to Mueller's office.
"I write the answers. My lawyers don't write answers," Trump said during a cybersecurity initiative bill signing in the Oval Office. "I was asked a series of questions, I answered them very easily."
Pressed on his tweet storm Thursday in which he accused Mueller's investigators without evidence of going "absolutely nuts," the president assured reporters that nothing of note triggered his tirade but that it was a “continuation” of the objections he’s already raised with the probe.
"There should have never been any Mueller investigation because there was never anything done wrong," Trump said. "There was no collusion — there never has been."
While he repeatedly stated that his legal team has not been involved in helping him write his responses to Mueller, Trump expressed concern over investigators looking to catch him perjuring himself.
“You have to be careful when you answer questions with people that probably have bad intentions,” Trump said.
Several former Trump campaign officials, including Michael Flynn and George Papadopoulos, have pleaded guilty to providing false statements to the FBI after their interviews with investigators.
Copyright © 2018, ABC Radio. All rights reserved.