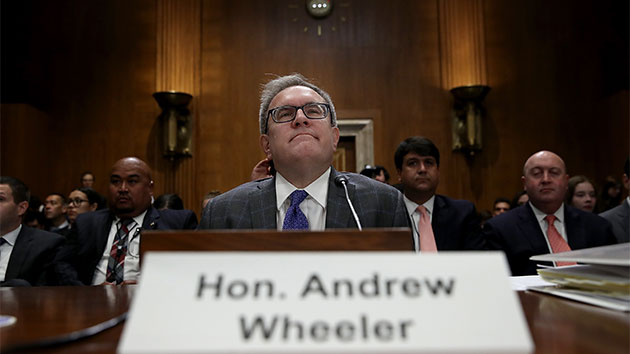 "Acting administrator who I will tell you is going to be made permanent. He's done a fantastic job and I want to congratulate him. EPA Andrew Wheeler," Trump said when introducing members of his Cabinet at a Medal of Freedom ceremony at the White House.

Wheeler took over as head of the EPA in July after former administrator Scott Pruitt resigned. Wheeler was confirmed as deputy EPA administrator in April after working as a lobbyist for energy and coal companies. He previously worked at the EPA under the George W. Bush and Bill Clinton administrations.

Environmental groups have criticized Wheeler for his part work lobbying for coal companies, but Wheeler has said he is not ashamed of that work.

Wheeler has had a relatively quiet year since taking over at EPA compared to the controversial tenure of his predecessor, but has continued to pursue the administration's agenda of reducing environmental regulations that he says were too burdensome on businesses under the Obama administration.

Trump has not yet officially nominated Wheeler as EPA administrator, at which point Wheeler would have to be confirmed by the Senate after facing questions at hearings.

Biden declines comment on report Trump tested positive for COVID days before debate
Michael J. Fox on retiring from acting, embracing optimism, and re-discovering what people love about ‘Back to the Future’
New York City chief medical examiner resigning
“It feels like Christmas!” Watch Andrew Garfield nerd out after getting greeting from ‘Cobra Kai’ cast
Nomination period open for 2022 Female Veterans Day Celebration
‘What’s at stake is obviously the security of our nation,’ NSA chief says of defending US from cyberattacks