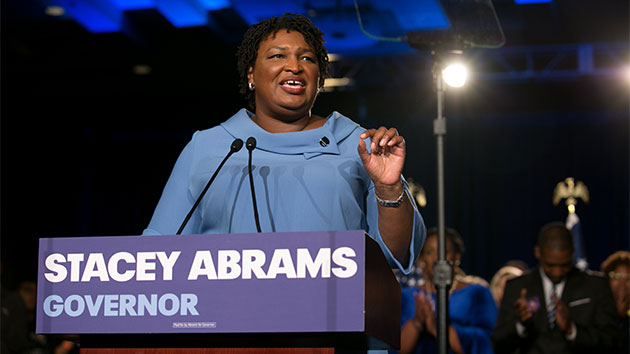 Jessica McGowan/Getty Images(ATLANTA) — Stacey Abrams, a leader in the Georgia Democratic party locked in a tumultuous election stained by lawsuits and allegations of voter suppression, said Friday she is acknowledging Republican Brian Kemp as the "victor" in the race to be Georgia's next governor, effectively ending the contest.

"But to watch an elected official who claims to represent the people in the state baldly pin his hopes for election on suppression of the people's democratic right to vote has been truly appalling," Abrams said at a press conference at her headquarters in Atlanta.

"This is not a speech of concession. Because concession means to acknowledge an action is right, true or proper. As a woman of conscience and faith, I cannot concede that," she added.

Kemp resigned as the state's secretary of state last week and started the process of transitioning into his new office, declaring himself the winner.

Legal victories since Election Day 11 days ago buoyed hope in the Abrams' camp trying to earn enough votes to force a runoff or a recount. But come Friday, there did not appear to be enough outstanding ballots to overcome Kemp's lead.

The state is able to certify election results Friday night, according to a ruling by a federal judge earlier this week.

Judge Amy Totenberg of the U.S. District Court in Atlanta wrote in her ruling Monday that the intention by the secretary of state's office to declare Kemp as the governor-elect as soon as Wednesday “appears to suggest the secretary’s foregoing of its responsibility to confirm the accuracy of the results prior to final certification, including the assessment of whether serious provisional balloting count issues have been consistently and properly handled.”

In her speech Friday, Abrams said as a private citizen she will launch a new group called "Fair Fight Georgia" which will bring a federal lawsuit against the state over its handling of ballots.

Abrams, who got a last-minute personal show of support from Ophrah Winfrey, would have made history as the state's first African-American chief executive and the nation's first black female governor.