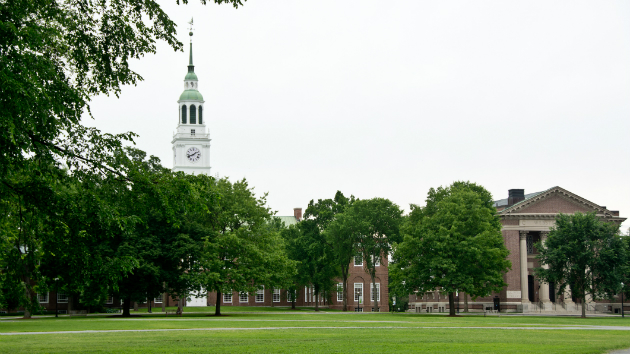 iStock/Thinkstock(HANOVER, N.H.) — Details of alleged widespread sexual harassment conducted by tenured professors in Dartmouth College's psychology department are beginning to emerge as plaintiffs in a class action Title IX lawsuit against the Ivy League school publicly recount their experiences.
A complaint filed Thursday in federal court for the District of New Hampshire alleges that three professors for Dartmouth's Department of Psychological and Brain Sciences "sexually assaulted, sexually harassed and raped female students," both undergraduate and graduate, within the department, according to a press release from the law firm that filed the lawsuit, Sanford Heisler Sharp.
Plaintiffs who spoke to ABC News described a climate in which they would not receive academic advising or resources to complete their research if they did not participate in an "unprofessional culture" of drinking and socializing outside of the office.
Each of the seven named plaintiffs are described in the release as "highly accomplished" female scientists who have all completed their doctorates in brain science and are now at Yale, Stanford and Dartmouth.
The department was referred to in the lawsuit as a "predators club" and a "21st Century Animal House." The class represented in the lawsuit is being defined as "the undergraduate and graduate women who were students in the PBS departments," Deborah Marcuse, managing partner of the Sanford Heisler Sharp Baltimore office, told ABC News.
The lawsuit is seeking $70 million in compensatory and punitive damages. Dartmouth College did not immediately reply to ABC News' request for comment.
Marcuse described the culture at Dartmouth's psychology department as including "flagrant harassment and gender discrimination."
The plaintiffs and other women in the department experienced "groping, leering, cat calling, all manner of inappropriate communications, and in some cases, sexual assault and rape" by the three professors, Marcuse said.
The professors also allegedly hired female lab assistants based on their physical attractiveness to compete for who had the "hottest lab," according to the complaint.
Professors would conduct professional lab meetings at bars and invite students to late-night "hot tub parties" in their homes as well as invite undergraduate students to use cocaine during classes related to addiction as part of a "demonstration," the complaint states.