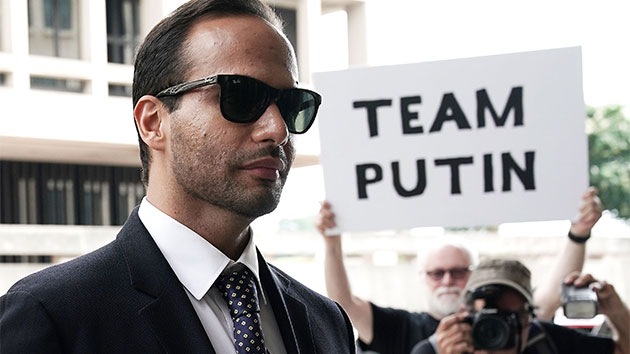 Alex Wong/Getty Images(WASHINGTON) — He’s pleaded guilty and been sentenced to prison, but former Donald Trump campaign aide George Papadopoulos is not quite ready to give up the fight.

With a new team of lawyers, the man once derided as a campaign “coffee boy” filed a last-ditch appeal with a Washington, D.C., federal court Friday to try to forestall his looming trip to a Midwestern medium-security penitentiary, where he is scheduled to surrender in 10 days.

In his court filing, Papadopoulos argues that the court should wait until an appeals court hears arguments in a separate case challenging the validity of the special counsel. Attorneys in that case, which was brought by a man fighting a subpoena from special counsel Robert Mueller, are scheduled to have briefs filed to the court by Monday.

“The D.C. Circuit’s decision in the pending appeal … may directly impact the validity of Mr. Papadopoulos’s prosecution and conviction,” his lawyers argue. “If the appeal is successful, then the Special Counsel lacked constitutional authority to prosecute Mr. Papadopoulos in the first instance.”

Given that the appeals case has already been argued and is awaiting a ruling, the Papadopoulos filing argues, “a modest stay of his incarceration pending the outcome of that appeal should be granted.”

The 31-year-old energy scholar, who in 2016 attempted his foray into electoral politics with the Trump campaign, was one of the first to be swept into Mueller’s Russia probe. In 2017, he admitted to lying to federal investigators and agreed to cooperate with the Mueller investigation. In September, Papadopoulos was sentenced to 14 days in prison – with the government arguing that he had not delivered the level of cooperation they had anticipated.

Papadopoulos was contrite at sentencing, telling a judge he felt remorse for lying to federal agents. In recent weeks, though, he has been making increasingly strident public comments in social media and in television appearances challenging the case against him. In late October, he appeared on “Fox and Friends” and said he was “actually even considering withdrawing my agreement I have come to with the government.”

The case Papadopoulos is now looking to was brought by Andrew Miller, a former associate of Trump confidant and political provocateur Roger Stone, who has refused a demand from prosecutors to appear before a grand jury. Miller is objecting, his lawyers said, in order to mount a broad legal challenge to the legitimacy of the special counsel probe.

Miller’s attorney, Paul Kamenar, told ABC News in August that he believes Miller’s constitutional battle could head all the way to the Supreme Court. He has argued that Mueller was not a constitutionally valid special counsel because he should be considered a “principal officer of the United States,” and therefore should have been appointed by the president. The Department of Justice has taken the position that he is an “inferior” officer who could be appointed by a deputy, in this case, Deputy Attorney General Rod Rosenstein.

To date, Miller’s argument has not carried the day. Attorneys for Miller tried unsuccessfully two times in July to quash a subpoena requiring Miller to testify before the special counsel's grand jury, arguing that Mueller lacked the constitutional authority to issue it.

On Friday, Miller’s lawyer expressed surprise that Papadopoulos had sought to tie his fate to the Miller appeal.

"The motion makes a compelling case relying on the arguments of our briefing that a short stay of sentence is warranted. However, the judge has broad discretion in sentencing matters," Kamenar said.

A spokesman for the special counsel’s office declined to comment.

A judge has asked the special counsel to file its response to the Papadopoulos request by Wednesday.