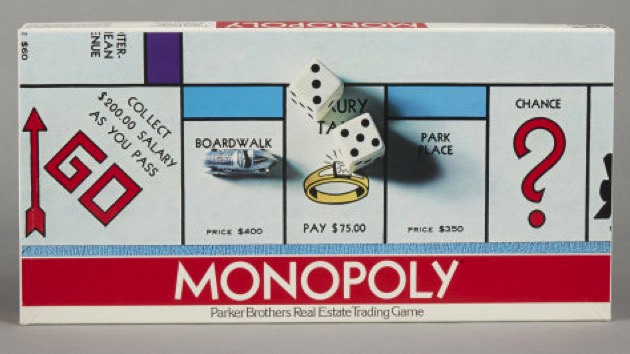 Hasbro(NEW YORK) — Monopoly is targeting millennials and actual millennials are sounding off.
Hasbro released this version of the board game earlier this year, but recently, Gen Y has been expressing feelings via Twitter.
"Whoever has the most debt gets to go first," one tweeted.

@Hasbro Can you provide the URL for the Hasbro-official website featuring "Monopoly for Millennials," where you trash on my age demographic because baby boomers caused an economic catastrophe that rendered us financially impotent for a decade? Thanks! pic.twitter.com/wmm0WQwnld

“Whoever has the most debt gets to go first” #MonopolyforMillennials pic.twitter.com/cmEz0N7v4g

"Let’s play a game of MILLENNIAL MONOPOLY," another wrote. "The rules are simple, you start with no money, you can’t afford anything, the board is on fire for some reason and everything is your fault."
Monopoly for Millennials is currently being sold in Walmart stores for $19.82, but is not listed on Hasbro's website.
Hasbro said in a statement that it created the game to poke fun at the oft-teased generation.
"We created Monopoly for Millennials to provide fans with a lighthearted game that allows Millennials to take a break from real life and laugh at the relatable experiences and labels that can sometimes be placed on them," the company said. "With many of us being Millennials ourselves, we understand the seemingly endless struggles and silly generalizations that young Millennials can face (and we can’t even!). Whether you are a lifestyle vlogger, emoji lover or you make your “side hustle” selling vegan candles, Monopoly for Millennials is for you!"

What should be on the board of #MillennialMonopoly ?
I say #CraftBeer and something that's #glutenfree pic.twitter.com/4IeMJbEFAV

#millennialmonopoly is $19.82 at Walmart. No millennial is gonna waste their money on a board game; we have other uses for our money: bills, debt, food, etc.
What are we gonna do anyways, play monopoly by ourselves in our parent’s basements? #wild pic.twitter.com/6EfymE6Duo

On the box, Mr. Monopoly appears to be snapping a selfie while wearing a participation award and ear buds. The mascot is also holding some sort of coffee drink, arguably poking fun at us millennials' love for lattes.
The board includes "Bike Share" spaces and no real estate available for purchase — presumably due to the game's tagline: "No real estate. You can't afford it anyway."

So, I’m a #Millennial who can’t afford to save for a house or even rent somewhere because rent per month is more money than money I get per month and I’m single so no second income to help, but I also think #Monopolyformillennials is hilarious. #Monopoly #MillennialMonopoly

While some expressed offense, others found humor in the theme.
"What should be on the board of #MillennialMonopoly? I say #CraftBeer and something that's #glutenfree," one tweeted.

"Pass go and collect 200…….then give 180 back for bills"
Community Chest: "Make student loan payment of 300"
Chance: "Get pestered by adults for not having children and a house by 27, pay stress tax"
*Goes Bankrupt*: "Lol you think the games over?"#MillennialMonopoly pic.twitter.com/wyaueZooPs

"Laughed so hard I fell off my dinosaur," another wrote in a Walmart review.
Game pieces include a hashtag and emoji, but hopefuls on Twitter were rooting for a ripe avocado.
Copyright © 2018, ABC Radio. All rights reserved.