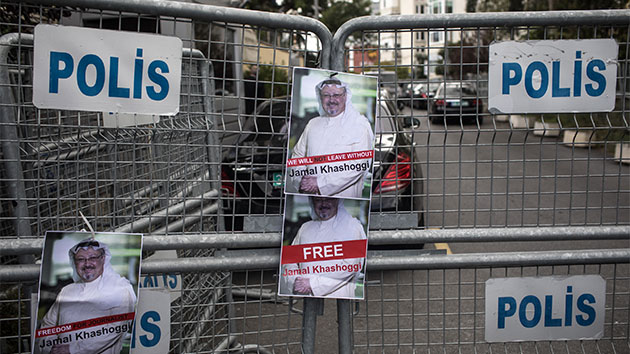 Chris McGrath/Getty Images(NEW YORK) — The team of alleged assassins sent to murder Washington Post columnist Jamal Khashoggi discussed their plan to kill the writer while he was making his way to Saudi Arabia's consulate in Istanbul, a high-level Turkish official familiar with the investigation told ABC News.

The exchange, captured on recordings of Khashoggi’s killing and the moments leading up to it, are part of the focus of Turkish investigators, the official said.

The extended recording allegedly includes a conversation among the assassination team about their plan just 15 minutes before Khashoggi arrived at the consulate, the senior official said. The recordings contain conversations between the alleged killers, discussing in detail how they would attack and then murder Khashoggi, the senior official added.

The purported recording would disprove claims by Saudi Arabia that Khashoggi was killed after a botched kidnapping. On Thursday, Saudi officials offered yet another version of events, saying Khashoggi’s killing was a spur of the moment decision by the team.

The official claimed the other recording contains conversations which shed additional light on the nature of the killing and those who carried it out.

The existence of another recording was first reported by the Turkish newspaper Hurriyet. On Friday, the newspaper reported the details of a conversation among the Saudi team in the minutes before Khashoggi’s killing. That report also said Turkey has recordings of international phone calls made by the Saudi team after Khashoggi was killed.

A second Turkish official familiar with the investigation told ABC News the Hurriyet report was accurate.

The recordings have led Turkish investigators to determine that the plot was hatched in Saudi Arabia, the high-level Turkish official said, speaking on the condition of anonymity to describe the investigation and the recordings which have not been publicly released.

"We gave them the tapes,” Erdogan said on Saturday in the first public acknowledgment of the recordings. “We gave them to Saudi Arabia, to America, to the Germans, the French, to the British, to all of them.”

A French counterterror official who has read a transcript of the purported recording told ABC News that the alleged hit squad threatened to bring Khashoggi back to Saudi Arabia.

The recording also purports to capture the gory moment of Khashoggi's death inside the Saudi consulate. On it, a struggle can be heard followed by what is claimed to be Khashoggi's killing, according to a Western intelligence source who listened to part of the audio.

Canada and Germany have both acknowledged receiving intelligence from Turkey about recordings of the murder.

"We are in discussions with our like-minded allies as to the next steps with regard to Saudi Arabia," Canadian Prime Minister Justin Trudeau said on Monday. The account based on the recordings is among the latest in evolving — often contradictory and competing — narratives put forth by Turkey and Saudi Arabia as to what actually happened to Khashoggi, often through anonymously-sourced news reports.

For several weeks after Khashoggi was last seen entering the Saudi consulate on October 2, Saudi officials insisted he had walked out of the building after applying for a certificate allowing him to marry his Turkish fiancée.

The kingdom then changed its story to say the writer had died in a brawl with consulate officials. Eventually, Saudi Arabia admitted the killing was premeditated, saying Khashoggi was set upon as soon as he entered the building.

Shortly after Khashoggi went missing, Turkey alleged that the writer, who was critical of Saudi Crown Prince Mohammed bin Salman, was strangled and dismembered at the Saudi consulate by a 15-member assassination squad. No trace of Khashoggi's body has been found and Turkish officials have since suggested the remains could have been chemically dissolved.

Saudi officials characterized the killing as a rogue operation carried out by Saudi agents who exceeded their authority. Yet some of those implicated in the killing are close to the crown prince, including a member of the prince's entourage on foreign trips, who was seen at the consulate before Khashoggi's slaying.

Turkey is seeking the extradition of 18 suspects who have been detained in Saudi Arabia, so they can be put on trial in Turkey. They include the 15 members of the alleged assassination team.

President Donald Trump's national security adviser said that people who have listened to an audio recording of the killing of a Saudi journalist do not think it implicates Saudi Crown Prince Mohammed bin Salman in his death.

"That is not the conclusion that the people who have heard it have come to," John Bolton told reporters at a summit in Singapore.

Bolton said Trump wants to learn the truth about what happened at the Saudi Consulate in Istanbul where Khashoggi was killed.

"I have not listened to the tape myself, but in the assessment of those who have listened to it, it does not, in any way, link the crown prince to the killing," Bolton said.

Erdogan described the content of the recording as a "calamity" and insisted that Riyadh take decisive action against Khashoggi's alleged killers.

On Thursday, Saudi Arabia said five of the individuals detained could face the death penalty if found guilty. Later on Thursday, the U.S. Treasury Department announced sanctions on 17 individuals for their roles in Khashoggi’s killing.