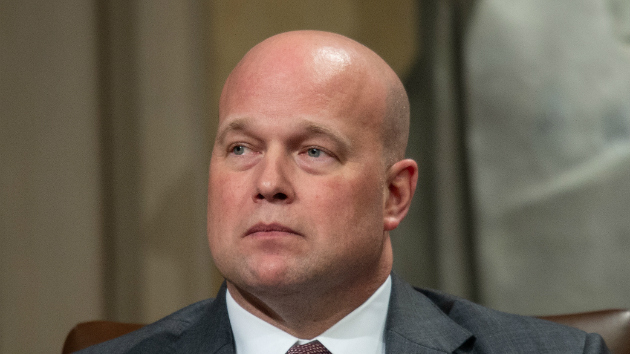 NICHOLAS KAMM/AFP/Getty Images(WASHINGTON) — Republican Sen. Lindsey Graham says acting attorney general Matthew Whitaker told him he is going to "honor regular order" when it comes to special counsel Robert Mueller's ongoing Russia investigation.
The two met for a private meeting in his office Thursday afternoon. Whitaker replaces Jeff Sessions, who was ousted last week.
Following the private meeting, Graham told reporters that he doesn't believe Whitaker will do "anything unsavory" when it comes to interfering with the Russia probe.
"I've a lot of confidence that Mr. Mueller will be allowed to do his job and that the legal process that was in place before Mr. Whitaker arrived will be followed," Graham said.
He went on: "And I have every confidence he’ll make reasoned decisions when his time comes and that the investigation is not in jeopardy."
Graham also said Whitaker did not express any reservations about how the Mueller investigation was handled thus far.
"Not at all as far as he knows, no, not at all," Graham said. "He’s seen nothing out of bounds. No concerns at all about Mr. Mueller."
In his new role, Whitaker will now oversee the probe, which he has publicly criticized in the past, including in an August 2017 op-ed for CNN. Sessions had previously recused himself of all Justice Department activity related to the investigation into Russian meddling.
Now, lawmakers are concerned that Whitaker’s objectivity is compromised because of his vocal criticism before joining the administration.
Despite calls from Democrats for Whitaker to recuse himself from overseeing the Mueller probe, Graham separately told Fox News that Whitaker doesn't feel the need to do so.
"He believed he did not have a reason to recuse himself legally or factually," Graham told Fox News. "Nothing I’ve seen would require him to be recused. I think he's got the background and the judgment to be able to fulfill this job."
Copyright © 2018, ABC Radio. All rights reserved.

Michael J. Fox on retiring from acting, embracing optimism, and re-discovering what people love about ‘Back to the Future’
Walmart CEO optimistic about holiday inventory, comments on FTC supply chain probe
What we know about Chinese tennis star Peng Shuai as the UN calls for probe into her whereabouts
With gas prices soaring, Biden calls for probe into possible ‘illegal conduct’
Democratic Sen Patrick Leahy announces he won’t seek reelection
Durham probe offers fresh support for man who has long denied being ‘Steele dossier’ source