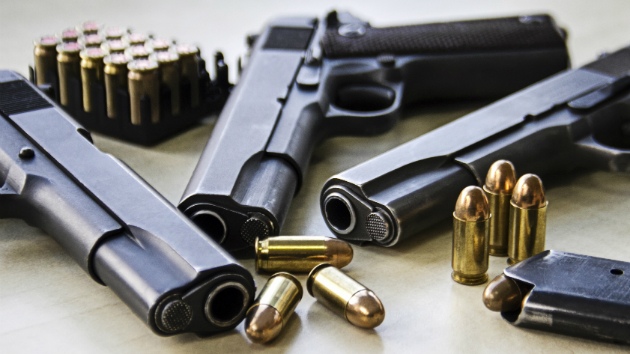 iStock/Thinkstock(HORTONVILLE, Wis.) — A family-owned business in Wisconsin that makes whiskey, beer and shot glasses with a decorative bullet built into them that they describe as “bulletproof” gave its company employees an unusual gift — $500 to purchase the gun of their choice.
The announcement came late last month during a company meeting.
"We wanted to give a gift they could use for personal protection and we thought it would be fun," Ben Wolfgram, co-owner of BenShot, the glassware design company in Hortonville, Wisconsin, told ABC News.
The staff of 16 was allowed to pick a firearm at any local gun shop, and use any remaining money to purchase firearm accessories. The staff is a mixture of veterans, experienced gun owners, and first-time gun buyers, according to Wolfgram.
Firearm purchases are usual in this town, where hunting is common, and the company’s decision raised no red flags with local law enforcement.
"Every business has to make a policy on what they want to do. It’s not mandated. If the owners feels uncomfortable [purchasing firearms] there is no problem with that," Hortonville Village Police Chief Kristine Brownson told ABC News.
Training isn’t required to carry a firearm, but Wolfgram said the employees at BenShot were trained on gun safety.
With a seemingly constant stream of mass shootings in the U.S., BenShot is receiving backlash on social media, with some Twitter users vowing to boycott the business.
"We try to respectfully listen to their opinion and respectfully disagree," Wolfgram told ABC News.

The company said it supports the NRA and the 2nd amendment.

"Our Company is based on ammunition. We put bullets in drinking glasses," he said.
Wolfgram said the purchasing of firearms has been great for team building.
"I purchased a Smith & Wesson. I got a revolver, that’s a 38 special. It’s awesome to be a part of something like this," Chelsea Priest, marketing manager at BenShot, told ABC News.
Only two employees chose not to purchase a firearm.

"I decided not to get a gun. My husband isn’t into guns and I didn’t need one at this time," glass technician Jan Westby told ABC News, but added that her decision was not a political one.
So far, Wolfgram said no employee has brought their firearm to work.
Copyright © 2018, ABC Radio. All rights reserved.

President Biden urges Senate to ‘step up and act’ on gun reform
8 killed in mass shooting at Indianapolis FedEx facility; suspect was former employee
Ferragine Spas and Pools in Ridgway destroyed by fire
Second round of funding available to farmers affected by COVID-19
Why this financial expert has a retirement alter ego: Money tips for single women
Clearfield Police: mother mixes infant’s formula with vodka, woman fired but shows up for work