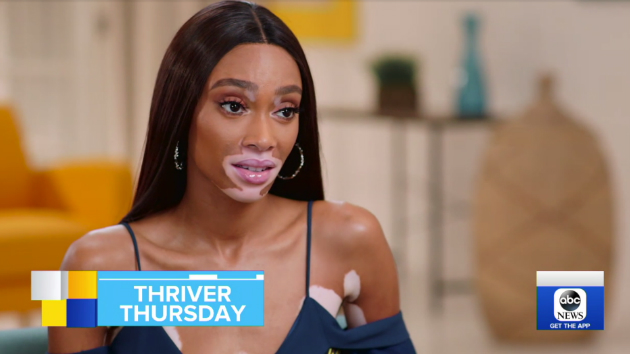 ABC News(NEW YORK) — Winnie Harlow is making history as the first model with vitiligo to walk in the Victoria's Secret Fashion Show.
"[It] blows my mind," Harlow told ABC News' Good Morning America co-anchor Robin Roberts. "I can't even believe it…I'm a trailblazer."
The 24-year-old model sat down with Roberts for her new digital series, "Thriver Thursday," and shared how she's overcome challenges as a fashion model despite her skin condition.
Vitiligo is an autoimmune disorder that causes depigmentation of the skin, according to the Mayo Clinic.
Harlow recalled how some classmates avoided her because of her skin.
"One day they were running away from me during recess and I caught up with them — I was like, 'Why are you running from me?' and they're like, 'Our parents say not to play with you because we're going to get your skin,'" Harlow said. "That was the first time I actually heard it and I was like, 'Whoa.'"
Now, for the first time ever, Harlow will be seen walking the runway at the high profile Victoria's Secret Fashion Show when it airs on ABC on Dec. 2.
But Harlow said her story and her mission are so much bigger than vitiligo.
"It's actually insane to me by just being yourself the things that you can achieve," she said. "I'm going to be the first model with vitiligo walking for Victoria's Secret. It's a door-opening for everyone. We are all the same because we're all different."
Harlow went on, "So people always ask me what would you like to say to little girls with vitiligo. It's bigger than that…it's those little girls with vitiligo, it's that little girl who didn't like her hair, it's that little girl who had freckles, it's that little boy who got teased because his lips were too big. It's everything."