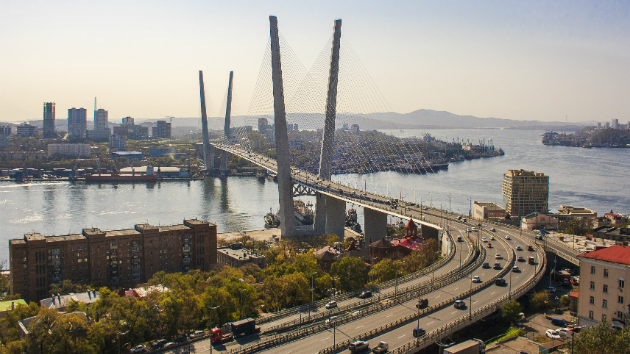 iStock/Thinkstock(MOSCOW) — Police pumped the brakes on four people who tried to cross an iconic bridge in Russia dressed as a cardboard bus.
Video shared widely on Russian social media Tuesday showed the "bus" — with four pairs of legs sticking out of the bottom — making its way through busy traffic on the Golden Bridge in Vladivostok.
The Golden Bridge, also known as the Zolotoy Bridge, was constructed for the Asia Pacific Economic Cooperation summit in 2012. A cable-stayed bridge, it spans the Golden Horn bay that opens onto the Sea of Japan.
In 2015, Russia’s Supreme Court ruled that the bridge should stay closed to pedestrians, based on the view that the walkways along it are too narrow to be safe. Since then, the issue has been a touchy subject with locals, who have maintained walking it is the shortest way into the city center.
The four men captured on video appeared to try to get around the pedestrian ban by dressing up as a bus.
In the video, a security guard is seen pulling the "bus" over and then forcing it to turn around.
A woman who filmed the incident from her car can be heard expressing surprise and delight when she sees the "bus," and then saying authorities ought to leave it alone.
"God, don't touch them!" she says on the video. "Why are they driving them away? It's beautiful. It's art. Why doesn't he understand that?"
Copyright © 2018, ABC Radio. All rights reserved.