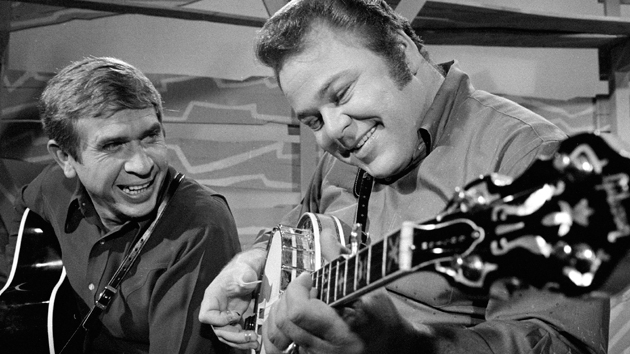 Roy Clark, foreground, with Buck Owens on "Hee Haw"; CBS via Getty Images(TULSA, Okla.) — Roy Clark, the Grammy-winning Country Music Hall of Fame member and celebrated picker who's best-known by most as co-host of TV's Hee Haw, has died at age 85.

Clark's publicist confirmed he died Thursday morning at his Tulsa, Oklahoma home of complications from pneumonia.

Hee Haw — a rural variety show that mixed homespun comedy with current country stars — premiered on CBS in 1969. When it was cancelled by the network, it moved to syndication, where it ran until 1992.

Though his musical prowess was somewhat overshadowed by his comedy success on Hee Haw, Clark was an accomplished multi-instrumentalist, admired for his abilities on both guitar and banjo. At the peak of his career, he was well-known enough to guest-host The Tonight Show for Johnny Carson.

Roy Clark was a Grand Ole Opry member who was inducted into the Country Music Hall of Fame in 2009. He’s survived by his wife of 61 years, Barbara. A memorial will be held in Tulsa in the coming days.