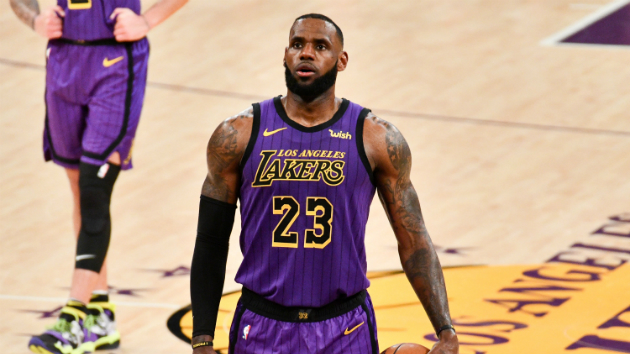 Allen Berezovsky/Getty Images(LOS ANGELES) — LeBron James is now fifth on the NBA's all-time scoring list after passing basketball legend Wilt Chamberlain for the spot in Wednesday night’s game against the Portland Trail Blazers.
The Los Angeles Lakers forward topped Chamberlain’s place on the list with a free throw late in the fourth quarter.

The and-1 that put @KingJames ahead of Wilt Chamberlain on the all-time NBA scoring list. pic.twitter.com/5IBqiv4Cli

James went on to finish the game with 44 points, helping his team beat the Trail Blazers, 126-117. He now has 31,425 points in his career.
"When I'm able to do what I love to do, and do it at this level — and even being mentioned with the greats that have ever played this game — it just always brings me back to my hometown of Akron, [Ohio]," James told ESPN after the game.
"And knowing where I come from, knowing how hard it was to get to this point — it's just never being in satisfied mode,” he added.
Copyright © 2018, ABC Radio. All rights reserved.