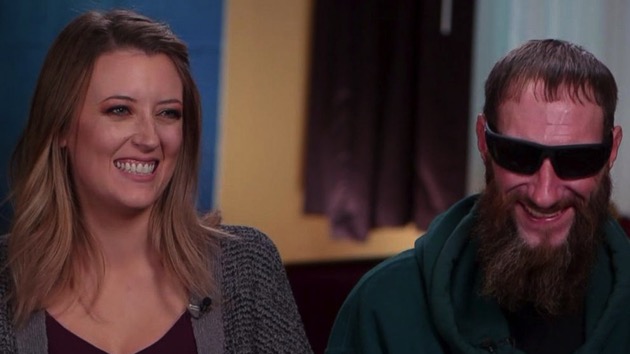 ABC News(BURLINGTON COUNTY, N.J.) — The "heartwarming tale" of a New Jersey couple helping drug-addicted homeless veteran Johnny Bobbitt was "predicated on a lie," designed to dupe thousands of people into contributing to a GoFundMe campaign, a prosecutor said Thursday.
Bobbitt, and the couple, Kate McClure and Mark D'Amico, allegedly conspired to concoct a story to tug at the hearts and wallets of kindhearted individuals, Burlington County Prosecutor Scott Coffina said at a news conference Thursday. They initially sought to raise $10,000. But the wildly successful GoFundMe campaign brought in over $400,000.
But every shred of the trio's story, including the part that Bobbitt used his last $20 to help McClure out of a roadside jam when she ran out of gas, was all bogus, Coffina said.
"The entire campaign was predicated on a lie," Coffina said. "Less than an hour after the GoFundMe campaign went live McClure, in a text exchange with a friend, stated that the story about Bobbitt assisting her was fake."
In one of the texts read by Coffina, McClure allegedly wrote to a friend, "Ok, so wait, the gas part is completely made up but the guy isn't. I had to make something up to make people feel bad. So, shush about the made up stuff."
GoFundMe, which has cooperated in the investigation, has agreed to refund money to the 14,000 people who donated to Bobbitt.
"While this type of behavior by an individual is extremely rare, it's unacceptable and clearly it has consequences. Committing fraud, whether it takes place on or offline is against the law. We are fully cooperating and assisting law enforcement officials to recover every dollar withdrawn by Ms. McClure and Mr. D'Amico," GoFundMe said in a statement.
Coffina said the suspected fraudsters might have gotten away with the scam had Bobbitt not filed a lawsuit against McClure and D'Amico in August, accusing them of withholding the funds from him.
He said the money is all gone, most of it squandered by McClure and D'Amico on gambling, numerous luxury handbags, a New Year's trip to Las Vegas and a BMW. The couple also used the donated funds to pay back $9,000 they owed to relatives.
McClure, 28, D'Amico, 39, and Bobbitt, 34, were all charged with second-degree theft by deception and conspiracy to commit theft by deception. They voluntarily surrendered to authorities on Wednesday, and have since been released, Coffina said.
Bobbitt was arrested Wednesday night by the Philadelphia Police Department on charges of being a fugitive from justice, according to Philadelphia police. He is expected to be extradited to Burlington County to face charges related to the GoFundMe case.
Reached Thursday morning, an attorney for McClure and D'Amico told ABC News, "We have no comment. Have a nice day."
In numerous media appearances, McClure claimed she was driving to meet a friend in September 2017 when she ran out of gas around midnight on the I-95 exit ramp near Philadelphia and Bobbitt, who was sleeping under a nearby overpass, came to her rescue. She claimed Bobbitt spent his last $20 to buy her gas.
"I pulled over to the side of the road as far as I could and I was going to get out and walk to the nearest gas station because it was not that far away, and that's when I met Johnny," McClure said last November in a "Good Morning America" interview. "He walked up and he said, 'Get back in the car. Lock the doors. I'll be back.' I was just like, 'OK.'"
She said Bobbitt used his panhandling money to get her out of the jam.
"I almost couldn't believe it," McClure added. "I said, 'Thank you…I swear, I'll be back. I promise I'll be back to give you [the] money back.'"
Hoping to repay Bobbitt for the apparent generous act, McClure and D'Amico set up a GoFundMe online account that tugged at people's hearts and wallets.
"I just got her gas to help her get back on her way. I didn't think anything about it. I wasn't expecting anything in return," Bobbitt told "Good Morning America." "That's how I got the money to start with — from other people. [I had to] return the favor. I can't constantly take and not give back."
Now it's unclear if the entire story was false.
Burlington County prosecutors said they would not discuss the case until Thursday afternoon.
In August, Bobbitt filed a lawsuit accusing McClure and D'Amico of committing fraud by taking more than half of the money they raised for themselves. His attorney alleged in court papers that the couple treated the donations like their "personal piggy bank to fund a lifestyle that they could not otherwise afford."
D'Amico and McClure denied the allegations.

In September, the Burlington County Prosecutor's Office launched a criminal investigation into the missing GoFundMe donations and raided the couple's home, seizing a BMW and other belongings.