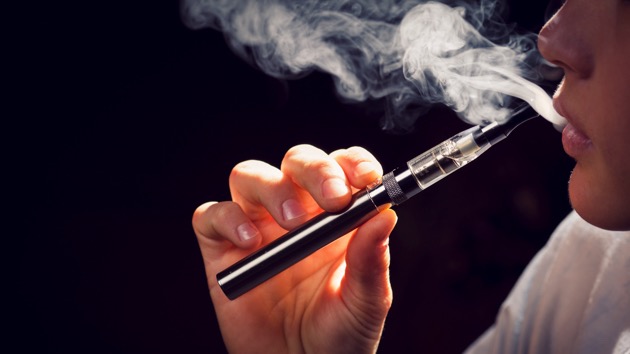 iStock/Thinkstock(WASHINGTON) — The Food and Drug Administration announced Thursday it will pursue a ban on menthol cigarettes and take new steps to keep youth from using flavored e-cigarette devices.
FDA Commissioner Scott Gottlieb has publically highlighted what he described as an “epidemic” of addiction.
“The actions #FDA announced today are a response to our deep concern over the epidemic growth in kids use of e-cigarettes,” Gottlieb said in a tweet.

THREAD: The actions #FDA announced today are a response to our deep concern over the epidemic growth in kids use of e-cigarettes. The data released by the #CDC shows a trend in use that simply cannot stand. We must reverse this trajectory of youth use and addiction….

The announcement comes with a new report which finds more than three million high school students use e-cigarettes. That’s up 20 percent since 2011.
At the same time, the number of middle school students using the nicotine products shot up by almost a factor of 10 to more than half a million using the devices in 2018, according to the Centers for Disease Control.
“The data released by the #CDC shows a trend in use that simply cannot stand,” Gottlieb tweeted. “We must reverse this trajectory of youth use and addiction.”
The U.S. Department of Health and Human Services identified the growing trend in 2016 and called e-cigarettes dangerous for young people.
Juul, a leading e-cigarette maker, tried to preempt additional regulation this week when the company announced it would rein in sales of flavored vaping devices popular with younger consumers, including mango, creme and cucumber.
The company rolled out what it calls an age verification system to help ensure only adults are purchasing the flavors online.
In the summer of 2018, the FDA used undercover investigators to crack down on more than 1,300 retailers illegally selling e-cigarettes like those made by Juul. It was the largest enforcement action of its kind in the agency’s history.
Last month, the FDA raided the San Francisco headquarters of Juul Labs, looking for documents related to the company's marketing practices. The federal regulator had been investigating whether Juul violated the law by targeting minors through its advertising and flavored products.
The new regulations come on the same day the FDA promotes its anti-smoking campaign which it calls the “Great American Smokeout.” The use of e-cigarettes has been left out of their primary list of tobacco-free alternatives promoted to help adults quit.
Gottlieb has continued to highlight the need for regulating e-cigs while acknowledging their use as a way of getting adult smokers to quit.
“I won’t allow policy accommodation we take to promote innovation to come at the expense of an epidemic of use of tobacco products by children,” Gottlieb said in a tweet. “We are now witnessing that epidemic.”
Copyright © 2018, ABC Radio. All rights reserved.