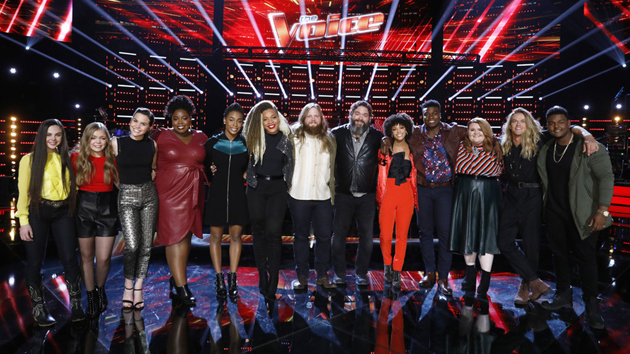 Trae Patton/NBC(LOS ANGELES) — On Tuesday night’s The Voice, Carson Daly revealed which of the three artists each from Blake Shelton, Adam Levine, Kelly Clarkson and Jennifer Hudson‘s teams who performed on Monday would advance to the next round: two based on America’s vote, the other chosen by his or her coach.

At the top of the show, Daly also acknowledged the passing of The Voice season 1 finalist Beverly McClellan, who died on October 30 at the age of 49 from endometrial cancer.

The artists advancing after Tuesday’s show are:

America saved soul artist DeAndre Nico and 14-year-old pop singer Reagan Strange. After agonizing over which of the remaining artists would complete his team, Adam settled on teen heartthrob Tyke James, explaining that there was still more he wanted to see from him. Steve Memmolo, RADHA and Kameron Marlowe went home.

America sent Kentucky native MaKenzie Thomas and Kennedy Holmes — the youngest artist in the competition at 13 — to the next round. Acknowledging it was a tough decision for her to make, Jennifer saved R&B singer Sandyredd. Franc West, Colton Smith and Patrique Fortson were sent packing.

Also on Tuesday’s show, Ayanna Joni and Lynnea Moorer, the two finalists from The Voice Comeback Stage — the show's new digital series in which judge Kelsea Ballerini gave artists who failed to get chair turns during the blind auditions a chance to re-enter the competition — performed for America’s vote. Joni tackled Ariana Grande’s “No Tears Left to Cry” and Moorer delivered “Boo’d Up,” by Ella Mai. America picked Moorer, who chose Clarkson as her coach and moves on, along with the other 12 contestants. Joni was sent home.

E! People’s Choice Awards 2021 — The winners
The “snot”-so-fun joys of parenthood, according to Katy Perry and Orlando Bloom
﻿Sex and the City﻿’s Chris Noth calls Sarah Jessica Parker, Kim Cattrall feud “sad and uncomfortable”
Watch extended sneak Peeks of ‘The Bachelorette’ and ‘The Bachelor’
‘Suge Knight and the Murders of Biggie & Tupac’, Halle Berry on Black progress in Hollywood, and more
What’s the best holiday movie in your home state?