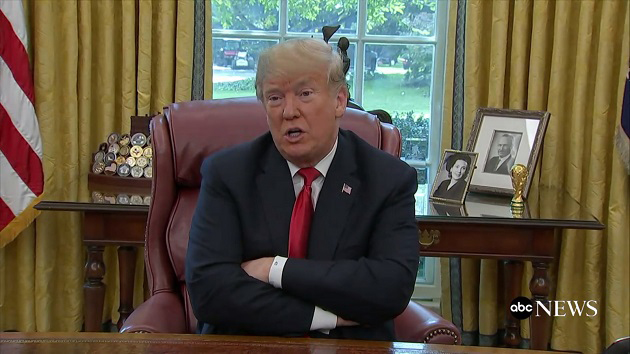 ABCNews.com(WASHINGTON) — President Trump is set to announce his support for prison and sentencing reform legislation championed by his son-in-law Jared Kushner at a White House event Wednesday afternoon.
“It's huge,” the president’s domestic policy adviser Ja’Ron Smith said of the president’s support for the legislation. “What we're doing here is finding a better way to be smart on crime. We want prison to serve as a place to lock up the people who are the most detrimental to society.”
The president has held back until now from putting his seal of approval on the Senate version of the legislation as he tasked his son-in-law with demonstrating that there is sufficient support among the law enforcement groups for the legislative action, according to sources familiar.
Kushner briefed the president on his progress on Tuesday, at which time the administration had secured endorsements from a handful of law enforcement associations, while some other groups that had actively opposed the legislation agreed to stay neutral on the legislation.
A narrower version of the bill, titled The First Step Act, passed the House earlier this year.
While the House version was focused on prison reform, the Senate language also includes sentencing reforms. It includes a measure to retroactively apply updated sentencing guidelines between crack and powder cocaine, will eliminate a regulation that makes it a federal crime to possess a firearm while committing another crime, give judges greater latitude to sidestep mandatory minimums for nonviolent drug offenses, and shorten mandatory minimum sentences for nonviolent drug offenders.
The administration’s aim now is to pass the legislation through the lame duck session of Congress.
“Yes, that's going to be the focus,” Smith said. “The president's leadership makes a lot of things possible.”
The administration’s legislative efforts on the issue have been complicated in the past by former Attorney General Jeff Sessions’ strong opposition to sentencing reforms. But with the former attorney general now departed, the path for achieving support for the legislation internally was made less complicated.
Kushner, whose father spent time in prison, has cited his family's personal experience with the nation's criminal justice system for his advocacy on the issue.

“She didn’t need any more training. She got me.” — Father of Rust armorer speaks out after fatal set shooting
Halle Berry says she burned her Razzie Award: “I set that thing on fire”
Appeals court weighs whether Justice Department should substitute for Trump in defamation suit
Treat yo self! Aziz Ansari reveals engagement during comedy set
President Biden to make at-home rapid tests free in new COVID plan
Biden declines comment on report Trump tested positive for COVID days before debate