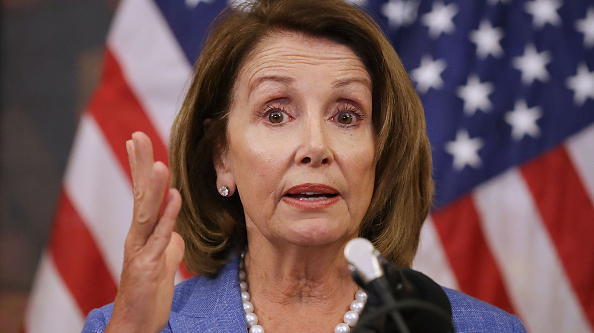 Chip Somodevilla/Getty Images(WASHINGTON) — Nancy Pelosi continues to fend off a rebellion in her ranks, working to win the support of enough House Democrats to clinch the votes needed to become Speaker of the House.
Lawmakers huddled Wednesday behind closed doors for the first time since winning back the majority in last week’s election, with several emerging to tell reporters that they remain dissatisfied with the Democratic slate of candidates.
“I’m not going to say anything about that,” Pelosi, D-Calif., told reporters after the meeting. “I’m just going to say that I will be speaker.”
Rep. Marcia Fudge, a veteran Ohio Democrat, bluntly called for a challenger to step up and face off against Pelosi. Though she flirted with the idea of taking on Pelosi herself, she emphasized that she is looking for someone else to step forward.
“It’s clear I’m not going to be voting for the current leader,” Fudge said. “I don’t plan to run, but there are a number of people who I think are capable. And so we are exploring, talking to those people.”
But Fudge would not slam the door on a potential bid herself.
“I never really thought much about it to be perfectly honest. I would say this, as we tout diversity in this party, there’s no diversity in our leadership. As we talk about the base of our party – black and brown – there are no black and brown people in our leadership,” she said. “If we’re going to talk about it, we’re going to talk the talk, we need to walk the walk.”
Rep. Tim Ryan, an ally in the quest to identify an alternative to Pelosi, floated Fudge as a possibility, stressing he wants the Midwest to have a seat at the table.
“There are several candidates out there that are great candidates that you know we have a very talented caucus, a lot of talent, and we just have to figure out who it’s going to be, you know, if anybody,” Ryan said. “But you know we’re going to bring change. The people want change.”
While Rep. Steny Hoyer has announced he has at least 155 Democratic signatures in support of his bid for majority leader, he refused to predict whether his play for the number two position could unravel if Pelosi’s campaign for speaker falls short.
“Everybody likes to talk about personalities. [What’s] much more important to the American people are the policies that we pursue,” Hoyer, D-Md., said. “The personalities will take care of themselves but the policies is what we’re going to really focus on.”
With several incoming Democratic freshmen vowing to oppose Pelosi on the campaign trail, many are now tight-lipped about the allegiance, waiting to see whether any contested races emerge.
“I’ve got a lot of listening, learning and navigating to do,” Rep.-elect Dean Phillips told ABC News. “I’ll be visiting with [Pelosi] later this week, and a number of others, and like I said, listen and learn.”
“I am uncommitted. I’m not sure if there will be other candidates putting themselves forward, but I want to be fair,” Rep.-elect Ayanna Pressley, D-Mass., said. “I haven’t met with the leader as of yet. We’re going to be sitting down.”
“I have not declared, and I’m really looking forward to understanding fully who’s running and what their agenda is and if it’s aligned with the best interests of the families across Illinois’ 14 district,” said Lauren Underwood, D-Illinois.
Rep.-elect Jeff Van Drew stressed he made a commitment to supporters and “I’m going to keep that commitment.”
“I come from a tough district, that requires a lot out of me, and I give it back to them. So when I tell you or my constituent, when I tell them something, I stick to it, Van Drew, D-N.J., said. “We’re a big tent and it makes the party look good if we have different ideas.”
Other veteran Democratic lawmakers have also refused to publicly endorse or oppose Pelosi.
“I think we’ll resolve that in the coming weeks,” said Rep. Peter DeFazio, D-Oregon, throwing up his hands in defense of an onslaught of questions about the speaker’s face.
“What a pleasant problem to have,” Rep. William Keating, D-Massachusetts, said.
Democrats are expected to hold their closed-door caucus leadership elections on November 28 while the full House of Representatives will elect the next speaker on January 3.