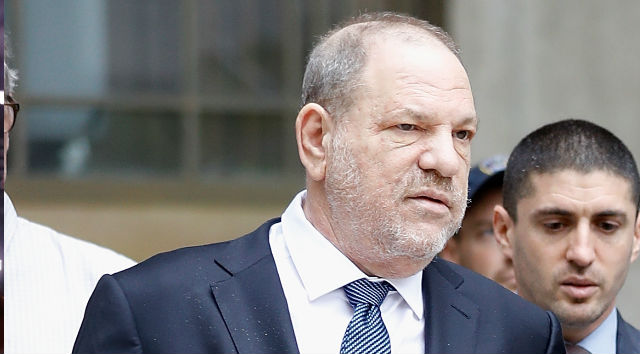 In a copy of the suit obtained by the entertainment website, the 34-year-old actress alleges the disgraced movie mogul exposed himself in a "taunting manner" while greeting her at the door of his Four Seasons Hotel room in Beverly Hills in 2011.

The documents go on to claim that another undressed woman was in the room, and that Weinstein invited her "to participate in a three party sexual encounter."

The alleged incident took place a year after a couple of earlier encounters in which de la Huerta has previously claimed she was raped by Weinstein in New York City. The suit alleges she was there to Weinstein to, "stop stalking and harassing her and quickly left the vicinity of Weinstein’s room feeling embarrassed, scared, shocked and humiliated. She added that that Weinstein appeared angered by her rejection and denunciation."

She explains her appearance in the doorway of Weinstein's Four Seasons hotel room as an attempt to warn him to, "stop the harassing phone calls, which he had that day resumed, and any further uninvited visits to her building."

Weinstein's lawyer, Ben Brafman, denied the claims on Tuesday, according to Deadline, saying, "It is our understanding that the Manhattan District Attorney’s Office carefully reviewed Ms. De la Huerta’s claims of sexual assault by Mr. Weinstein many months ago and made a conscious decision to reject her as a complainant for obvious reasons."

Adds Brafman: "We also believe that her newly minted version of events including her new California claims are equally preposterous and unfortunately, the product of an unstable personality with a vivid imagination."

De la Huerta's lawsuit come on the heels of another accusation of sexual misconduct earlier this month, alleging Weinstein assaulted a 16-year-old model: claims Brafman, called "preposterous" in a statement to ABC News.

Last month, Weinstein scored an apparent legal victory, when the Manhattan District Attorney’s office dropped one of the charges against him involving Lucia Evans, the actress who accused Weinstein of forcing her to perform oral sex in 2004.

Ever since allegations of sexual misconduct against Weinstein came to light late last year, he has continued to deny any claims of non-consensual sex.