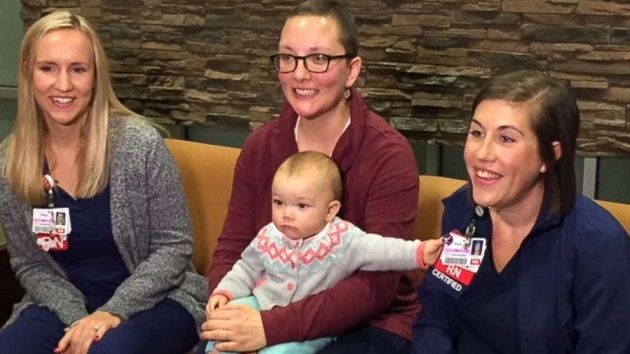 Community Hospital North(INDIANAPOLIS) — A pay it forward chain that began with two nurses in an Indianapolis neo-natal intensive care unit has allowed a mother of three battling breast cancer to feed her 10-month-old daughter breast milk.
The chain started when Katie Hanover, 29, a NICU nurse at Community Hospital North, gave birth last November nearly five weeks early.
Hanover’s daughter, Maggie, spent six days in the same NICU where she works.
Hanover’s coworker, Abby Black, who had her daughter Vivian just one month earlier, volunteered to donate her breast milk to Hanover.
"Just working in the NICU I’ve been educated on the importance and value of human breast milk," Black said. "It was something I had more than enough of, so it was an easy decision to make."
Once Hanover was able to breastfeed Maggie herself, she had a big enough supply that she too started donating her breast milk.
When a lactation consultant at the hospital told Hanover about Kata Carter, a mother who was facing breast cancer, Hanover jumped at the chance to donate her breast milk to Carter.
"I knew that feeling and knew I wanted to pay it forward," she said. "I was like, 'Absolutely. In a heartbeat.'"
Carter, 34, also of Indianapolis, was diagnosed in March with stage 3B inflammatory breast cancer, a rare subtype of the disease. She noticed a lump in one breast while breastfeeding her youngest daughter, Rosie, then just 3 months old.
"It was pure shock," she said of the diagnosis. "I had run through what seemed like every scenario of what [the lump] could have been in my mind and cancer was not one of them."
Carter said she was breastfeeding Rosie in her doctor’s office when she received the cancer diagnosis. She had to stop breastfeeding almost immediately and began the first of six rounds of chemotherapy just a week later.
"I got all of the information at once, the cancer, the type and that I had to stop breastfeeding," she recalled. "The thing that struck me immediately was the breastfeeding. I was devastated."
Carter, a dietitian, received support from a group of graduate school friends who knew how much she wanted to breastfeed Rosie. One of them, who lives out of the country, connected her to Hanover.
“We met in person the very first time she donated to me and she brought probably 600 or 800 ounces,” Carter said of Hanover. “Katie knew the feeling of not being able to breast feed her daughter so I think that connects us a lot.”
In the months since that first donation, Hanover has donated hundreds of more ounces of breast milk to Carter, including some from Black, her fellow NICU nurse.
Carter said the donations have been a "huge relief" as she has faced a mastectomy and radiation in addition to the six rounds of chemotherapy.
"They took that off my plate," Carter said of her concerns about not being able to breastfeed Rosie. "To take that worry away was enormous."
Hanover’s and Black's donations also started another chain reaction of breast milk donations to Carter from friends and strangers alike.
Carter estimates she has received thousands of ounces of donated breast milk over the past seven months. One group of friends got together to purchase and install a deep freezer in Carter’s home to store all of the milk.
“It’s not really anything I can express in words,” Carter said of her gratitude. “I know that if I were able to I would return the favor in a heartbeat. It’s one of the most precious gifts I’ve ever received.”
Copyright © 2018, ABC Radio. All rights reserved.