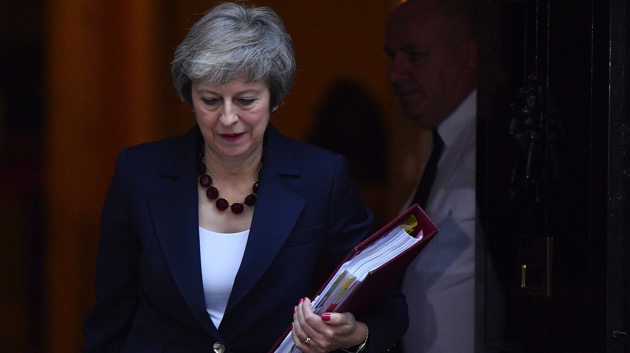 BEN STANSALL/AFP/Getty Images(LONDON) — Theresa May was meeting her Cabinet ministers on Wednesday after news emerged that the European Union and the United Kingdom had signed off on a draft withdrawal agreement about the terms of Britain’s exit from the Union.
The agreement over the terms laid out in a 500-page document represents a major step forward in the Brexit process, though May faces an uphill struggle getting all of her cabinet ministers to support the deal before the process can progress any further.
Ministers in May’s government have been receiving briefings from her — one by one — at her residence at 10 Downing Street since Tuesday evening and throughout Wednesday to go over what terms are covered in the proposals.
A crunch meeting of the whole government on Wednesday afternoon was expected to be a pivotal moment in the process.
If not enough members of the cabinet back the agreement, May faces difficult options: going back to the European Union (EU) negotiators to try and find further concessions, facing the prospect of a challenge to her leadership from within her own ranks, or even triggering a general election. If her cabinet backs the agreement, the Brexit process goes to the next stage: a vote in Parliament where all members of Parliament (MPs) will take a vote on whether they support the agreement on the terms of withdrawal. Since Tuesday night details have leaked from European negotiators, and ‘Brexiteer’ MPs who advocate having fewer ties with the EU after the exit have warned that they will not back May’s deal on the basis of leaks that they say indicate the deal puts the U.K. in a weaker position than the EU. On the other hand, MPs who supported the Remain movement have also said they will not vote for the deal because, from what they have heard, the agreement does not go far enough in securing a close relationship with the EU and they believe it will harm Britain’s economy.
Many of those MPs are also pushing for a second referendum on Brexit –- a contentious idea for many parliamentarians who say that holding a second vote on the question is a subversion of democracy and will anger the British public. May also faces a looming challenge from the opposition.
Labour Leader Jeremy Corbyn says he wants a general election.
He is expected to instruct his MPs to vote against the agreement or at least abstain, when it comes to a Parliamentary vote.
If too many Labour MPs reject the agreement, it could pave the way for a general election, and possibly the prospect of Corbyn becoming Britain’s next prime minister.
Copyright © 2018, ABC Radio. All rights reserved.