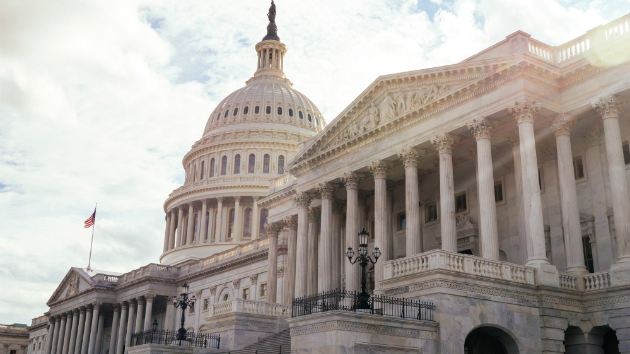 “I just want to let all of you know how proud I am of each and every single one of you, for putting yourselves and your bodies on the line to make sure that we save our plant, our generation and our future,” said Ocasio-Cortez, who was also taking part in the first day of orientation for newly elected members of Congress.
Pelosi encouraged the demonstration and restated support for a special select committee to focus on climate change. But the moment also highlighted the challenge facing newly-empowered House Democrats in their majority: how to handle the grassroots energy and expectations of the party’s progressive ranks while delivering on the policy and oversight promises that propelled Democrats to victory in moderate suburban communities.
House Democrats from across the ideological spectrum have been quick to seize on the results of the midterms as validation of their vision for the agenda of the Democratic-led House. Joking that many Democrats “prefer to spend their life in the fetal position, rocking in the corner of a room,” Rep. Mark Pocan, D-Wis., the co-chair of the Congressional Progressive Caucus, told reporters on Monday that the group will “fight like hell” to advance its priorities, such as Medicare-for-all.

The group, which could become the largest Democrat caucus with more than 90 members next year, has created its own policy center to push Democrats to the left and shape the debate on Capitol Hill from the outside, in an effort to leverage its influence.

“This isn’t your mother or father’s progressive caucus,” Pocan said.
Rep. Josh Gottheimer of New Jersey, a co-chair of the moderate, bipartisan Problem Solvers Caucus, said that Democrats’ performance in districts previously held by Republicans indicates that the party “won through the middle.”

“I think it was clear that extremism was not the answer, and that practical problem solving from the middle is,” he told ABC News, arguing that progressives fell short in GOP-held House districts and races where they weren't vying to replace retiring Democrats.

The caucus, which is evenly divided between Republicans and Democrats, is advocating for rule changes in the House to encourage more bipartisan legislation.
“There’s great history where bipartisan, divided government led to legislative success,” Gottheimer said. “It obviously depends on how the president and the administration responds, as well as the Senate. I think that we in the House should look to find areas where we can govern and get things done for the American people, and that’s our job.”

“There are several core values that unite Democrats in both the progressive and more moderate wings of the party,” he said. “The challenge for House Democrats is to keep their eye on both constituencies and not close either the left eye or the right eye.”
Democrats are also aware that the party faces a challenge balancing oversight of the Trump administration with legislating, and have been careful to describe their plans to investigate the president and his administration's actions.
"I'm not going to be handing out subpoenas like somebody's handing out candy on Halloween," Rep. Elijah Cummings of Maryland, the incoming chairman of the House Oversight Committee, said in an interview with ABC Chief Anchor George Stephanopoulos on This Week.
To that end, they plan to put forward a catch-all government ethics bill that will be designated "House Resolution 1" in the new Congress, that will include lobbying reform, public financing for political campaigns, measures to tighten conflict-of-interest rules, and election security, among other provisions.
“It’s a real opportunity to make a bold statement to the electorate that Democrats have been paying attention, we get it, we want to give people their voice back,” Rep. John Sarbanes of Maryland, who has led House Democrats’ efforts on the subject, told ABC News.
Copyright © 2018, ABC Radio. All rights reserved.