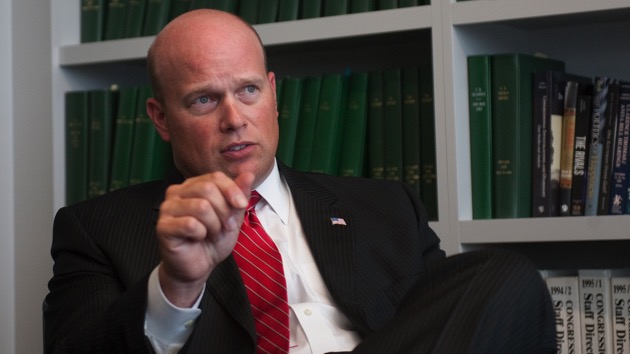 Douglas Graham/CQ Roll Call(WASHINGTON) — A week after President Donald Trump forced Jeff Sessions to step down from heading the Justice Department and appointed Matthew Whitaker as acting attorney general, the DOJ has now authored a memo defending Whitaker's appointment as legal and constitutionally valid.
The high-level appointment of Whitaker — a frequent critic of special counsel Robert Mueller's probe who was not confirmed by the Senate before joining the Justice Department last year as chief of staff to Sessions — has prompted both Democrats and even some Republicans to cry foul.
But in a memo Wednesday to White House counsel Emmet Flood, the Justice Department's Office of Legal Counsel says, "Mr. Whitaker's designation as Acting Attorney General accords with the plan terms of the Vacancies Reform Act," which states that when cabinet members and other senior government officials are "unavailable" to fulfill their duties, the president can appoint other government officials to temporarily serve in the positions if those replacements are sufficiently senior and have been employed by the government for at least 90 days.
Speaking to reporters Wednesday on the condition of anonymity, a senior Justice Department official said the Justice Department provided the legal analysis at the behest of the White House — but the official refused to say when the White House asked if appointing Whitaker would be constitutional.
Further, the memo argues that Trump could appoint have appointed Whitaker whether Sessions voluntarily resigned or was explicitly fired by Trump.
"Doesn't that mean that, in theory, the president under your interpretation could fire anyone he wants and … just make anyone a Cabinet official?" a reporter asked the Justice Department official.
"I don't want to address hypotheticals," the official responded, "[but] it is correct that if the president terminates officials, that official is unavailable under the Vacancies Reform Act."
A lawsuit filed by the state of Maryland on Tuesday is challenging the constitutionality of Whitaker's appointment, insisting the Constitution and U.S. law require that someone acting as attorney general and other "principal" positions be confirmed by the Senate.
The memo written by the Justice Department says that previous administrations, including under Presidents Barack Obama and George W. Bush, have similarly appointed non-Senate confirmed officials to positions that report directly to the president.
However, asked whether someone not confirmed by the Senate has ever been appointed acting attorney general, the Justice Department official said, "The best examples we found were in 1866" — four years before the Justice Department was created.
The official would not say whether the Office of Legal Counsel has advised Whitaker over whether he should recuse himself from overseeing Mueller's investigation.
Copyright © 2018, ABC Radio. All rights reserved.