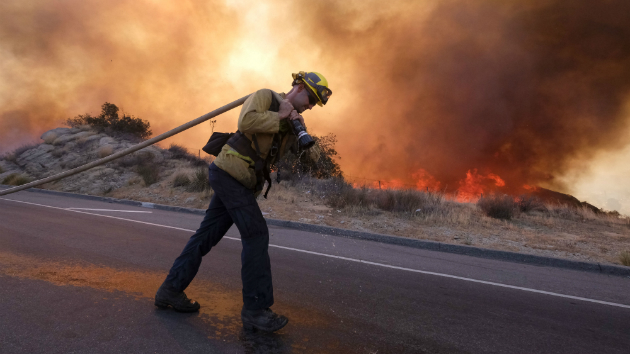 Xinhua/Zhao Hanrong via Getty Images(NEW YORK) — U.S. Health and Human Services Secretary Alex Azar on Wednesday declared a public health emergency in California, where at least 50 people have died from multiple wildfires ravaging the state.
"We are working closely with state health authorities and monitoring the needs of healthcare facilities to provide whatever they may need to save lives and protect health," Azar said in a statement. "This declaration will help ensure that Americans who are threatened by these dangerous wildfires and who rely on Medicare, Medicaid and the Children’s Health Insurance Program have continuous access to the care they need."
Two massive blazes burning at opposite ends of the state have forced the evacuation of at least two hospitals and eight other health care facilities. A smoke advisory was issued for portions of Los Angeles County amid concerns that smoke from the fires could present a "significant health threat" for people with asthma and other lung conditions, according to the U.S. Department of Health and Human Services.
Thousands of exhausted firefighters battling the Camp Fire in Northern California and the Woolsey Fire in Southern California appeared to be getting a handle on the two massive blazes. But authorities continued to find more bodies amid the scorched destruction.
At least 50 people have been found dead from the fires, which have laid waste to more than 9,000 structures, according to the California Department of Forestry and Fire Protection.
Meanwhile, officials have warned of howling winds that could spawn more monster blazes with the slightest spark.
There's a new extreme fire danger in San Diego County, where wind gusts of up to 86 mph were recorded early Tuesday morning, according to the National Weather Service.
The blustery condition prompted red flag warnings for the San Diego area, signaling extreme fire danger through at least Wednesday, officials said.
Some schools in San Diego County were closed Tuesday, and San Diego Gas & Electric took the precautionary measure of shutting off electricity in some fire-prone areas of the county to avoid new blazes, officials said.
Firefighters, with the help of out-of-state fire crews, were showing progress in their twin battles to subdue the widely-destructive blazes that have blackened a combined acreage larger than the size of New York City.
Copyright © 2018, ABC Radio. All rights reserved.