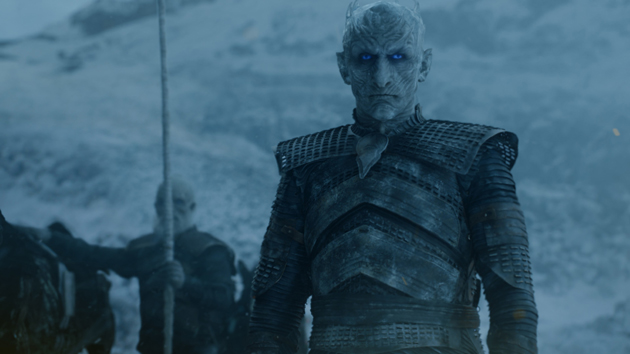 Vladimir Furdik as the Night King; courtesy of HBO
Posted on November 13, 2018 by ABC News

Vladimir Furdik as the Night King; courtesy of HBO(NEW YORK) — (SPOILER ALERT) We've known for what seems like ages that Game of Thrones isn't returning until next year, but we haven't known when — until now.

HBO has just revealed that April will see the return the eighth and final season of their worldwide hit medieval fantasy drama. Still no date, however, on when the first episode will air.

They spilled the news with a series tweets and videos, each featuring a pivotal moment from the show all the way back to season one, and each with the hashtag #FortheThrone. As of late Tuesday morning there were 13 videos — Daenerys becoming khaleesi, Ned Stark's execution, Joffrey Baratheon's death, the Red Wedding, Jon Snow's resurrection, the Battle of the Bastards and more, ending with the season seven final scene of the dragon Viserion, now an undead pet of the zombie Night King, destroying the Wall.

"Every battle. Every betrayal. Every risk. Every fight. Every sacrifice. Every death," HBO declares.

As of last word, we're still expecting Game of Thrones season eight to be just six episodes, though many of those will me much longer than an hour. We also know shooting on the final season began back in October of 2017 and only ended in early fall of this year.

Entertainment Weekly also revealed two weeks ago that the final season opens with Daenerys Targaryen and her army arriving at the Stark ancestral home of Winterfell to prepare for their final battle with the Night King and his army of the dead, which producers say is the longest sustained action sequence ever created for TV or film. Peter Dinklage, who plays Tyrion Lannister, says, “It makes the Battle of the Bastards look like a theme park," referring to the mammoth season six battle.

Daniel Dae Kim reveals his ‘Lost’ character was supposed to be killed off in the first season
Minnesota pro team’s postpone game following shooting of Daunte Wright
“You don’t want to do this”: Bucky and Sam face off against the new Cap in ‘The Falcon and The Winter Soldier’ preview
Final 2021-22 hunting and trapping seasons approved
Cicada invasion: After 17 years underground, billions to emerge this spring
Justin Timberlake to star as game show host Chuck Barris in new Apple TV+ series