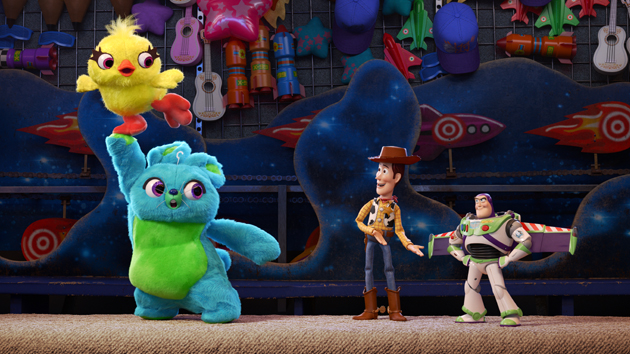 Disney/Pixar(NEW YORK) — Monday, we were unexpectedly treated to the first teaser-trailer for Toy Story 4. Today, we get an even bigger surprise — an official reaction video to the teaser-trailer.

But this reaction video isn't your usual online nobody gasping into the camera as we watch them watch a trailer. This one's from Pixar themselves, and features two brand-new Toy Story 4 characters: carnival toys Ducky and Bunny, a stuffed yellow duck and a fluffy blue-and-green stuffed rabbit voiced by none other than Keegan-Michael Key and Jordan Peele, respectively.

We meet Ducky and Bunny at a carnival shooting gallery after closing time, where they're chilling out on the counter. Bunny asks Ducky if he's seen the new Toy Story 4 trailer. That leads to them taking turns imitating Buzz Lightyear's catchphrase "To infinity and beyond!" as well as a brief but on-the-nose Keegan-Michael Key impersonation of Tom Hanks as Woody.

But neither Ducky nor Bunny can get the catchphrase correct — that is, until Woody and Buzz themselves show up.

"It's 'To Infinity and beyond!'" Buzz declares. Which leads to Ducky and Bunny busting up laughing.

"That's the stupidest thing I ever heard!" says Ducky.

"You can't go to infinity, dummy!' Bunny chimes in. "It's just impossible!"