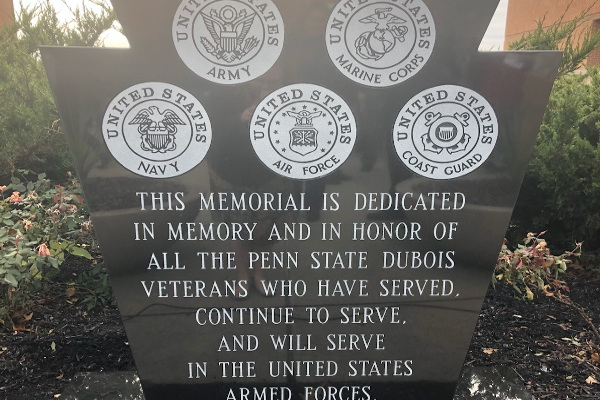 DuBois, PA – There’s a new monument on the Penn State DuBois campus, honoring the students who have served, are serving, or will serve in the armed forces.

The black granite monument is shaped like a keystone, the symbol of Pennsylvania, and features the seals of all five branches of the military. It stands underneath the flagpole on the campus.

The Penn State DuBois Veterans Club was inspired by similar monuments on other campuses. With the approval from Penn State DuBois, they began raising money through donations and fundraisers like a 5K.

Watch the video of the entire ceremony that was held at the campus on Monday.

The dedication of the new Veterans Memorial at Penn State DuBois.The DuBois VFW will perform a 21-gun salute as part of the ceremony. Veterans Club members will unveil the new memorial to honor all students, past, present and future, who serve or have served in the armed forces, during a dedication ceremony. The granite, keystone-shaped stone will feature the seals of all five branches of the U.S. military, as well as an inscription memorializing student veterans of the campus.