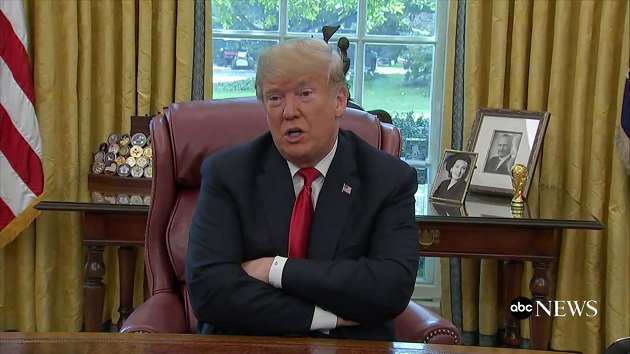 ABCNews.com(WASHINGTON) — President Donald Trump is huddling with his lawyers this week to craft responses to list of written questions from special counsel Robert Mueller, sources close to the president told ABC News on Tuesday.
Trump and his legal team met on Monday in Washington, D.C., to discuss the list of questions from Mueller, and were expected to reconvene on Tuesday, the sources added.
The questions, as ABC News has previously reported, center on alleged Russian meddling during the 2016 election cycle, which Mueller is tasked with investigating. The nearly year and a half long probe by the special counsel stems from allegations of Russia coordinating with members of the Trump presidential campaign.
Mueller and his team of prosecutors have indicted 32 individuals and three Russian businesses on charges ranging from computer hacking to obstruction of justice.
Those indictments have led to six guilty pleas and three people sentenced to prison.
Four former Trump campaign officials – including his onetime national security adviser Michael Flynn and former campaign chairman Paul Manafort – are among those who have pleaded guilty.