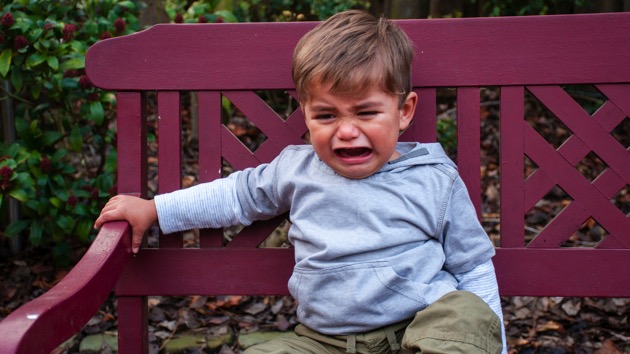 iStock/Thinkstock(NEW YORK) — It's happened to every parent on the planet at least once and perhaps many more times: your kid is in a stage 3, Defcon 1, the-wheels-have-completely-come-off meltdown.
They're screaming. You're sweating. You're looking for every. possible. way. to distract, distract, distract so they will calm. down.

The Train Analogy
Katie McLaughlin, a blogger and mom of two, wrote about the train analogy in 2017 on her site Pick Any Two.
"The moment I published the post, the response was overwhelming," she told Good Morning America.
"I couldn't keep up with all the comments and shares. It obviously resonated with other parents who were struggling to help their children manage their big emotions."
It goes like this, according to McLaughlin: "Difficult feelings are tunnels, and we are trains traveling through them. We have to move all the way through the darkness to get to the — you knew this was coming! — calm, peaceful light at the end of the tunnel."
Now apply this to your child. That's what McLaughlin did when her four-year-old had temporarily lost his beloved tiger lovey blanket named Glenn. A broken heart and a full meltdown ensued.
"So often when our kids are struggling with a difficult feeling — sadness, anger, fear, embarrassment, loneliness, guilt — we try to logic them out of it," she wrote in her post. "We explain why they’re overreacting, or how WE know it will turn out just fine in the end."
"We’re trying to help our children, of course, but if we peel back the layers a bit, I think we’ll find that what we’re really doing is trying to make OURSELVES feel better," she said. "Because our children’s pain hurts US so deeply, makes US so acutely uncomfortable."
So instead of telling her son he would be fine, McLaughlin simply sat beside him and did nothing.

"I just sat next to him as the ripples of anger melted into shaking and sobbing," she wrote. "When I thought it was OK to do so, I started rubbing his back — still without speaking. He kept crying and crying and crying. He cried and he cried and he cried."
"Until he wasn’t crying anymore."
"Until, from his vantage point — splayed out on the floor — he caught a glimpse of a nearby book about world-record-holding dogs, pulled it over, and started paging through it. As if nothing had happened at all."
"I peeked at the clock," she said. "It had been eight minutes."
"I decided speaking would be OK now, so I asked my son if he wanted to make a plan," she said. "I told him I knew that bedtime tonight would be extra tough, but maybe we could think of some ideas together to help him through it."
"Had I suggested such a thing two minutes prior, he would have EXPLODED," she said. "But because I waited until his train was through this tunnel, it was fine."
"Without any additional prompting from me, my 4-year-old chose two different stuffed animals to sleep with that night, then asked if we could read two extra books before bed to help make the evening more special," she said.
"Later, as I kissed him goodnight and he turned onto his side to fall asleep, he said peacefully, 'I’m going to be OK tonight.'”
Andrew D. Wittman, Ph.D., author of the book Seven Secrets of Resilience for Parents, told GMA that "because of how much we care about our child, we are tempted to immediately look for ways to solve their problem and shield them from any perceived suffering.
"This actually shields the child from learning how to process and deal with the situation," Wittman said. "We tend to fix the problem instead of teaching and coaching the child through the cognitive steps of finding a workable solution and learning how to channel his or her emotions in a productive direction."
He said the train analogy can be useful as a one-off, stop-gap measure and only as a short-term tactic.
That said, "it should not be utilized in a more public setting."
"Allowing your child to have a 'going through the tunnel' experience in the middle of the candy aisle at the grocery store is enabling, encouraging and rewarding the child to be controlled by their emotional reactions," he said.
McLaughlin told GMA that she has used the train analogy at home several times since the Glenn incident with great success.
"I've used it when my son was bawling over losing a soccer game. I've used it when my daughter was hysterical because her jacket zipper got stuck. Yes, our children need to learn how to handle these small disappointments and frustrations, but we also need to remember that in their world, these aren't small at all."
"So instead of telling them their emotions aren't valid or trying to logic them out of their tears, I choose to support and comfort them through the emotional tunnel. Nine times out of ten, it's only a few minutes before they're back on their feet," she said.
Wittman suggested the "first responder" technique as a long-term strategy.
"Teach the child how to perceive any situation in a way similar to a First Responder instead of an emotional reactor," he said. "Imagine a firefighter showing up to a house that is on fire and having to go through the tunnel before taking any life-saving actions."
Since McLaughlin first published her "train analogy" post, it's been shared more than 300,000 times on Facebook and almost 50,000 times on Pinterest.
"My recommendation to parents is to remember what your job is — and what it isn't," she said.
"Your job is not to get your child to stop crying and be happy again as quickly as possible. Rather, your job is to provide comfort, show empathy, and be there with your child as they travel through the tunnel of their emotions. They will make it to the other side!"
Copyright © 2018, ABC Radio. All rights reserved.