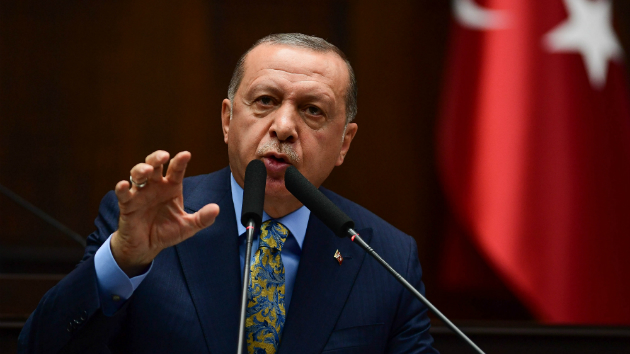 Getty Images(ISTANBUL) — A Saudi Arabian intelligence official was "shocked" after listening to an audio recording of Washington Post columnist Jamal Khashoggi's murder during a recent visit to Istanbul, Turkish President Recep Tayyip Erdogan said.
Erdogan described the content of the recording as a "calamity" and insisted that Riyadh take decisive action against Khashoggi's alleged killers, according to a report in Turkey's Hurriyet Daily newspaper.
Speaking to local media Monday night while returning to Istanbul from Armistice Day ceremonies in Paris, Erdogan claimed the unnamed Saudi official "was shocked after he listened to the recording and he uttered that 'only a person on heroin can commit such an action,'" as the Daily Sabah reported.
Erdogan did not elaborate on how and when the Saudi official listened to the recording.
A source close to Turkish intelligence authorities confirmed to ABC News that Saudi Arabia's chief prosecutor, Saud al Mojeb, was played the audio recordings by Turkish intelligence officers last month during an investigative trip to Istanbul.
A story in The New York Times reported Turkish authorities claimed a member of the assassination team instructed a superior over the phone to "tell your boss" the operatives had completed the mission. The Times article attributed this information to three people familiar with recordings of Khashoggi's murder.

The New York Times article also said American intelligence officers believe the "boss" in the that phone conversation refers to Crown Prince Mohammed bin Salman, the de-facto ruler of the Saudi Kingdom.
The Times report went on to claim that a recording was shared last month with CIA Director Gina Haspel and is considered by intelligence officials as some of the strongest evidence linking Mohammed to Khashoggi's murder.
Reinforcing an assertion he made over the weekend, Erdogan said Monday night that Saudi Arabia, the U.S., France, Canada, Germany and the U.K. have been given audio recordings of the murder and said they are patiently waiting for the Saudis to shed light on the issue "as promised by Saudi Crown Prince Mohammed bin Salman."
Erdogan said that he discussed the Khashoggi murder with U.S. President Donald Trump, German Chancellor Angela Merkel and French President Emmanuel Macron during a dinner in Paris and told them it was obvious that Khashoggi's murder was ordered and instructed by the high echelons of the Saudi hierarchy.

"From their reactions I believe they were disturbed about it too," Erdogan said to Hurriyet.
Erdogan added that he told Trump "there is no need to look elsewhere for the murderers since they are surely among the 18 people detained by Saudi authorities, including the 15-member team that came to Istanbul before Khashoggi's disappearance."
Khashoggi was a Saudi citizen and a resident of the United States who wrote columns for the Washington Post critical of bin Salman. He was reported missing by his fiancée, Hatice Cengiz, after entering the Saudi Consulate in Istanbul to obtain marriage documents on Oct. 2.
At the end of October, al-Mojeb made headlines during his visit to Istanbul by admitting that the killing of Khashoggi was premeditated, contradicting a previous official statement from Riyadh saying it was an accident.
At around the same time in late October, a Turkish prosecutor publicly revealed shocking details of the murder, claiming Khashoggi was strangled as soon as he stepped into the Saudi Consulate in Istanbul and that his body was dismembered.
A statement from the Turkish prosecutor, Irfan Fidan, said Khashoggi's killing was planned in advance.
Erdogan said Monday night that Turkish authorities have asked the Saudis where they disposed of Khashoggi's body and are still waiting for a response.
Copyright © 2018, ABC Radio. All rights reserved.