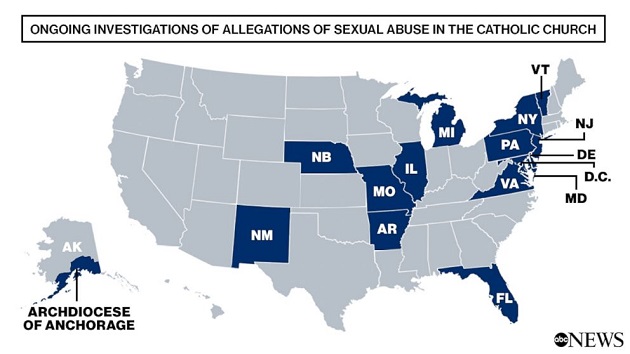 ABC News(BALTIMORE) — Protests are slated to take place in Baltimore this week as church leaders gather at the annual General Assembly of the U.S. Conference of Catholic Bishops to discuss the ongoing sexual abuse crisis.
Several prominent groups advocating for the rights of survivors of sexual abuse by clergy have planned demonstrations outside the Baltimore Marriott Waterfront as U.S. bishops contemplate their response to the widening scandal, described by one observer as "The Catholic Church's biggest crisis since the Reformation."
An event that was expected to culminate in steps toward increased transparency and accountability took a sudden turn on Monday morning when Cardinal Daniel DiNardo, president of the U.S. Conference of Catholic Bishops, announced in his opening remarks that a pair of votes on proposed policy changes to address the abuse crisis would be delayed "at the insistence" of the Vatican.
DiNardo, who told the assembled church leaders he was informed of the order late Sunday, said he was "disappointed" but remained "hopeful" progress could be made.
"We remain committed to the specific program of greater episcopal accountability that we will discuss these days," DiNardo said. "Consultations will take place. Votes will not this week."
The Survivors Network of those Abused by Priests, or SNAP, the country's oldest and largest support group for survivors of clergy abuse, issued a statement Monday slamming the Vatican for "kick[ing] the can down the road."
"It is clear that a real response is needed in order to prevent future abuse, deter more cover-ups, and ensure accountability for bishops who fail to protect children and vulnerable adults," the statement said. "Today's action by the Vatican makes us wary that such a real response will be taken."
In a small demonstration held outside the conference venue on Monday evening, protesters called for DiNardo to resign and for bishops to make a firm commitment to fully cooperate with the various law enforcement investigations into clergy abuse that have been launched across the country.
Delaware recently became the 16th jurisdiction to launch an investigation of clerical sex abuse following the release of a Pennsylvania grand jury report detailing the cover-up of decades of abuse by hundreds of Catholic priests.

Probes have already been launched by officials in Arkansas, Florida, Illinois, Maryland, Michigan, Missouri, Nebraska, New Jersey, New Mexico, New York, Pennsylvania, Vermont, Virginia and the District of Columbia — as well as the Archdiocese of Anchorage in Alaska — with officials in several other states telling ABC News their offices were reviewing their options and considering taking similar action.
The crisis has shaken the church's global hierarchy and prompted calls from some critics for the resignation of Pope Francis, but the Vatican appears to have remained skeptical of outside scrutiny.
In his address to the conference on Monday, Archbishop Christopher Pierre, the Vatican's ambassador to the United States, cited the "effective" measures that have already been taken and stressed that the responsibility to address the crisis rested with the bishops.
"There may be a temptation on the part of some to relinquish responsibility for reform to others than ourselves, as if we were no longer capable of reforming or trusting ourselves, as if the deposit of trust should be transferred to other institutions entirely," Pierre said. "We must show that we can solve problems rather than simply delegating them to others."
Copyright © 2018, ABC Radio. All rights reserved.