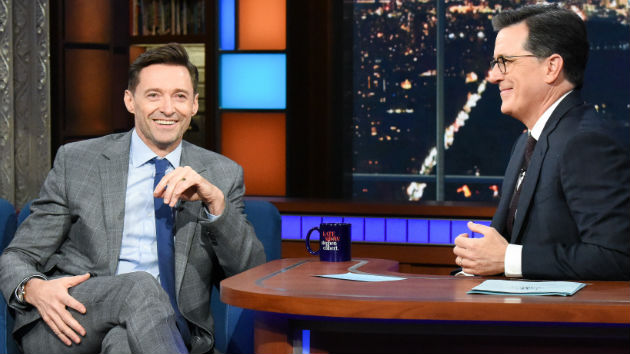 Colbert fans know the Captain America shield that Colbert wielded on the Daily Show followed him to his Late Show set, where it still hangs above the audience.

"Today, the world lost a legend," said Colbert, who noted Lee's service in World War II and love for his beloved wife of 70 years, Joanie, who died in 2017.

"Thanks for all the stories, Stan, Colbert said, adding to the comic icon, his catchphrase: "I know you're hearing it a lot today, but: 'Excelsior.'"

Incidentally, Colbert's first guest Monday night was Hugh Jackman, who played Wolverine, one of Lee's X-Men, in nine movies. Jackman — who wasn't initially supposed to play the razor-clawed character in 2000's X-Men — is now synonymous with him. "I remember Stan as a true gentleman who had this glint in his eye," Jackman said. "He is a creative genius…He created a whole universe that changed the lives of many people, mine included."

The actor also recalled Lee's fame could check anyone's ego. "[Y]ou think, 'Well, I'm Wolverine, I'm walking in to Comic Con, you know, this is my spot. This is a good day for me.' And I was on a red carpet, and I was the only one on there, and nobody was taking my photo — because on the other end, there was about 300 photographers and interviewers, just all on Stan."

He ended with, "God bless you, Stan, you're one of the greats."
Disney, who acquired Marvel almost a decade ago, released a statement from CEO Bob Iger that read, "Stan Lee was as extraordinary as the characters he created. A superhero in his own right to Marvel fans around the world, Stan had the power to inspire, to entertain, and to connect. The scale of his imagination was only exceeded by the size of his heart."

Other celebs were quick to commemorate the comics icon, moments after the news broke. Robert Downey Jr., the man who helped get Marvel movies on the map, posted a photo of he and Lee together, commenting, "I owe it all to you,,, Rest In Peace Stan."
Captain America himself, Chris Evans wrote, "There will never be another Stan Lee. For decades he provided both young and old with adventure, escape, comfort, confidence, inspiration, strength, friendship and joy. He exuded love and kindness and will leave an indelible mark on so, so, so many lives. Excelsior!!"
Spider-Man Tom Holland wrote, "How many millions of us are indebted to this guy, none more so than me. The father of Marvel has made so many people so incredibly happy."
Ryan Reynolds posted a photo of Lee in one of his many cameos, this one when he played a strip joint DJ in Deadpool. That hero's alter-ego said, "Damn… RIP Stan. Thanks for everything."