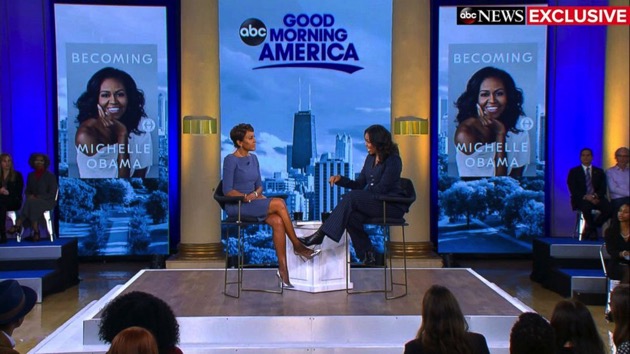 ABC News(NEW YORK) — Former first lady Michelle Obama said her two daughters, Malia and Sasha Obama, are “thriving” post-White House and said she will always love a trio of former first children for helping her daughters.
“Let me just say this out loud in public: I am so proud of those little girls,” Obama said of Malia and Sasha in an exclusive interview Tuesday with Good Morning America anchor Robin Roberts. “They have managed this situation with poise and grace and they are normal and kind and smart and friendly and open.”
Sasha, 17, will graduate from high school in Washington, D.C., this spring, and Malia, 20, is a sophomore at Harvard.
“They are great. They are thriving,” Obama said of her daughters.
Malia and Sasha were just little girls living in Chicago in 2008, when their father, Barack Obama, was elected president. They moved to the White House and went through middle school and high school under the scrutiny of being first children.
Obama credited Jenna Bush Hager, Barbara Bush and Chelsea Clinton with helping Malia and Sasha through their White House years.
“I love those girls,” she said of the Bush sisters and Clinton. “I will love them forever for what kind of support they provided to my daughters throughout that.”
Bush Hager and Bush, who turn 37 later this month, welcomed Malia and Sasha to the White House in 2009 with a letter that gave them advice like finding loyal friends, sliding down the banister of the White House solarium for fun and taking part in every White House engagement and trip they could.
When Malia and Obama left the White House in 2016, the Bush sisters wrote them another letter welcoming them into what they called the "rarified club" of former first children, describing it as a club with membership that Malia and Sasha didn’t seek and "one with no guidelines."
"We have watched you grow from girls to impressive young women with grace and ease," they wrote.
Obama, whose memoir, Becoming, was released Tuesday, thanked the Bush sisters and Clinton for not only personally sharing advice with Malia and Sasha, but also defending them publicly, even after the Obamas left the White House.
"They always had their backs," she said. "[If] somebody went after them in the press, Jenna would get in there and say something. Chelsea would send a tweet out."

Malia Obama’s private life, as a young woman, a college student, a private citizen, should not be your clickbait. Be better.