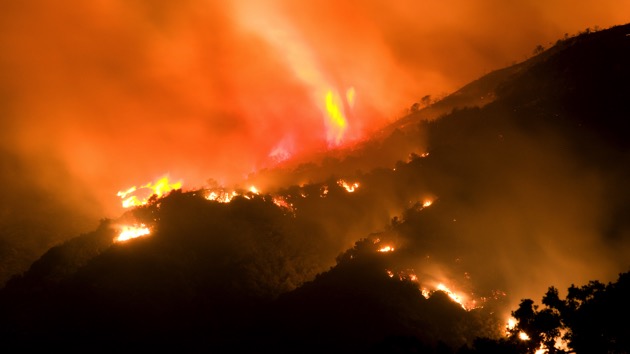 iStock/Thinkstock(PARADISE, Calif.) — When Norma Weldon, a blind, 90-year-old woman, refused to evacuate her home as the deadly Camp Fire neared, her son, Brad Weldon, stayed behind to fight off the blaze.
Miraculously, their Paradise, Calif., home is now one of the very few still left standing.
When the fire roared into the neighborhood, Brad Weldon said he had just minutes to prepare water and hoses.
"The wind was coming this way … 60 mile-an-hour winds. It was coming straight at us," Brad Weldon told ABC News. "We both hit the ground and started watering ourselves down because we were going to cook."
Houses then went up in flames, one after another after another.
What he described as a "fire tornado" started churning, but then the powerful winds pushed "the fire away from us."
"I believe that was the angels," he said.
At least 42 people have died in the Camp Fire, now the the deadliest on record in the state. The blaze nearly demolished the town of Paradise.
"I walked a mile and a half and saw four houses," Brad Weldon said. "Everybody I know lost everything."
"I feel fortunate, almost guilty, because I don’t know if I was brave enough or stupid enough, but we stayed and fought it," he said. "And mom wouldn’t have left even if I wanted her to."
"Where would I go? I don't know anywhere," his mother, Norma Weldon, told ABC News. "There's a heavenly father up there that loves all of us and he will take care of all of us."

With so many of his neighbors suddenly homeless, Brad Waldson said he'll open his home to those in need. "All my loved ones know that if they need me, I’m here. … I’ll turn this into a tent city," he said. "They’re all welcome."

Man arrested for threatening to attack LGBTQ community with guns, bombs
Man arrested, charged in harassment case against Kim Potter judge
Omicron live updates: Minnesota man who became one of the first cases in US speaks out
“Something to remember me by”: Scott Adkins tore Dolph Lundgren’s bicep in their ‘Castle Falls’ fight scene
Strangers donate breast milk after mom of newborn dies of COVID-19
Mom uses thousands of data points to show workload of maternity leave