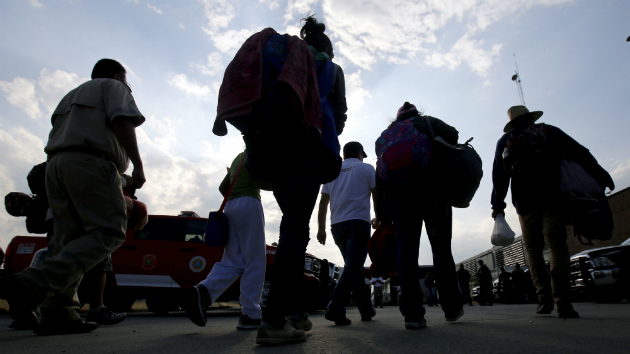 ULISES RUIZ/AFP/Getty Images(NEW YORK) — Approximately 100 of an estimated 11,000 migrants, less than 1 percent of those U.S. officials are tracking across four groups, may reach the U.S. border south of San Diego on Sunday.
The overwhelming majority of those from Central America fleeing hardship on foot are hundreds of miles away, weeks from nearing U.S. soil.
A U.S. official speaking on the condition of anonymity confirmed to ABC News that border authorities are girding for the first group of about 100 to arrive in Tijuana by the end of the weekend.
The San Ysidro port of entry there is "at capacity," and border officials anticipate asylum seekers will be stranded in Mexico until they can be processed, according to a statement emailed to ABC News by U.S. Customs and Border Protection.
The so-called ports of entry aren't designed to house hundreds of individuals at a given time while still enabling trade and travel between the two nations.
"Balancing these demands, keeping illicit goods and people out of the country, and managing the influx of Central Americans seeking asylum (along with everything else we do) requires a careful balance of our resources and space," the statement said. "Depending upon port circumstances at the time of arrival, individuals presenting without documents may need to wait in Mexico as CBP officers work to process those already within our facilities."
President Donald Trump has threatened to use force against the migrants at the border should it come to that.
"They're throwing rocks viciously and violently," said Trump, referring to an incident between migrants and police in Mexico. "They want to throw rocks at our military, our military is going to fight back."
Copyright © 2018, ABC Radio. All rights reserved.