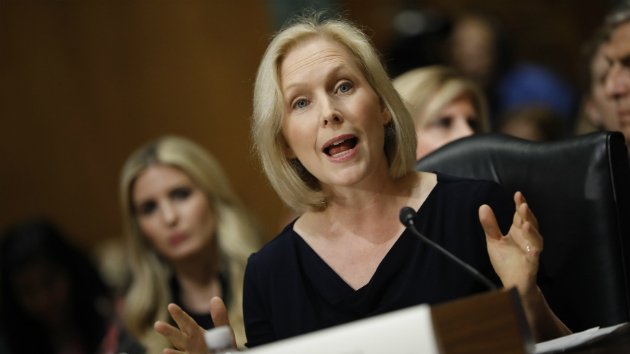 Aaron P. Bernstein/Getty Images(WASHINGTON) — Sen. Kirsten Gillibrand has some advice for the more than 100 women elected to join Congress after this historic midterm election cycle.

At least 110 women were elected to Congress — 84 Democrats and 14 Republicans will join the House — while 12 will join the Senate — 10 Democrats, two Republicans.
When she was first elected, Gillibrand said veteran representatives like Sen. Barbara Mikulski and Sen. Dianne Feinstein pulled her aside to give her their best advice. Now she's hoping to pay it forward.

"First piece of advice I would give is to follow your heart," Gillibrand said. "Bring the passion that got you elected to Washington to make things better for people. Our job is fundamentally to help people."

Focus on the issues

To tackle the first 100 days in office, considered an early gauge of success, Gillibrand’s advice to new representatives is to use that time to focus on the issues.

"It's a different experience than anything they’ve ever done before, but they have a real opportunity to elevate the voices of the people they represent from their district, or from their state, and talk about the challenges they are facing," she said.

The issues Gillibrand hopes to focus on this year — all raised by her constituents, she said — are health care, education and the economy.
A lesson learned the hard way

When Gillibrand was first sworn into Congress in 2009, she said she had a hard time getting her colleagues to care about the 9/11 Health and Compensation Act and turned to former Sen. Mary Landrieu for advice on how to get her message across.

"She said 'First of all, you have to tell people why you care and elevate those stories,’" she said. "And that is the best advice I’ve ever been given."

"Understanding what your constituents need, what their issues are, what they care most about, what their fears are, what they’re worried about, and then you need to translate that into policy that actually could help them," she said.

Moving into a federal position

The newly elected members of Congress come from all kinds of backgrounds, including community organizing, health care and the military. Gillibrand hopes they use what they learned in their different fields to make a difference.

"It's really about taking all you learned from the grassroots and bringing it straight to Washington, and then working with your colleagues to find that common ground, find the consensus to actually make it happen," she said.

'Speak up' to make the most impact

Gillibrand encourages the new members of Congress to raise their voices for the issues that are important to them.

"Speaking strongly and loudly about the things you care about," she said. "Speaking out, speaking up, not giving up."
Gillibrand said she hopes young girls and boys who read her book feel inspired.

"This democracy only works when regular people stand up and demand action. Hopefully these young girls and boys who read my book realize that they are suffragettes of today," she said.

Fresh off an election win, Gillibrand may be considering a presidential run in 2020.

"It's something I will give long hard thought to," she said. "I do think it's a moral question right now."
Copyright © 2018, ABC Radio. All rights reserved.