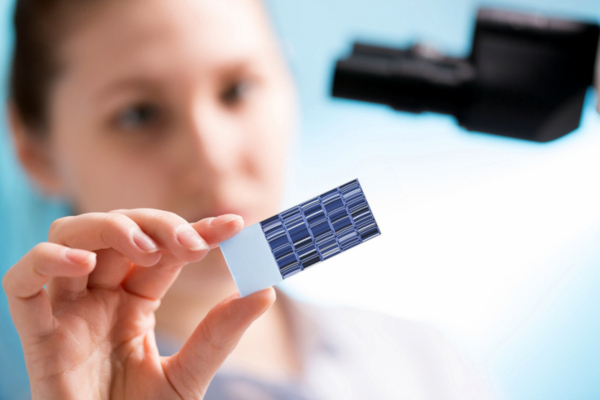 chromatogram sequencing on slide in woman hand
Posted on November 13, 2018 by wcednews

Pennsylvania – If you’re looking for a unique gift for the science or history lover in your life, you might be considering buying them a DNA testing kit, which have gained popularity in the past several years.

It used to be that DNA profiles were only available through a doctor’s office, but now companies like 23andMe and AncestryDNA can help map a person’s family background.

The FDA also just recently allowed commercial DNA reports to include heredity markers for conditions such as Alzheimer’s or Parkinson’s disease.

Carla Easter from the National Human Genome Research Institute says these could be a good gift… as long as the recipient is ready to get all of that information.

Like with any gift, you should think about whether it’s appropriate for the person.

Some critics of DNA kits says they provide information that can frighten people or could contain delicate information about your health that you wouldn’t want shared.

However, supporters say that there’s no better way to get to know yourself, your family history, and your genetics.

Discovered in 1953, DNA – deoxyribonucleic acid – is an inherited set of instructions that defines the characteristics of all living organisms.

Most people might only think about DNA when they watch crime investigation and courtroom dramas. But Carla Easter, education director for the National Human Genome Research Institute says there’s a lot more to it. The institute is the official sponsor of National DNA Day, with programs and events that focus on the importance of genetics.

“To inform the public that this is a day to stop and think about the things that DNA does for us, and how it does impact our lives in ways that we don’t often think about,” said Easter. “How important it is for us to be informed.”

She explained that in 2003, a worldwide network of scientists completed the decades-long process of mapping the entire DNA makeup of humans, known as a genome sequence. National DNA Day celebrates that event.

According to Easter, the genome allows doctors and scientists to determine thousands of traits about a person, from their hair and eye color and body type, to any potential genetic abnormalities.

“I think we would not have recognized all of that without the sequencing,” she said. “So, on some levels, we’ve allowed people to recognize the benefits of DNA, but also the idea that your genome is not necessarily just your destiny.”

Until recently, DNA profiles were only available through a doctor’s office, but now companies are selling kits and profiles that can help map a person’s family background. Also, the U.S. Food and Drug Administration recently approved the sale of DNA reports that include hereditary markers for conditions such as Alzheimer’s or Parkinson’s disease.

Easter noted that the value of these products depends a lot on what the buyer expects from them.

“I think it depends on how you intend to utilize the information,” she stated. “For some people, it’s fun for them to know as much as they can. And for some people, they may feel that it’s important – once they have that information – to take it to a physician.”

More information about National DNA Day, and genetics in general, is on the institute’s website.