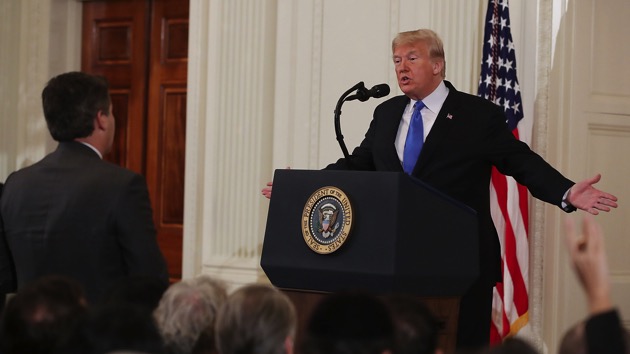 iStock/Thinkstock(WASHINGTON) — CNN and its chief White House correspondent Jim Acosta filed suit Tuesday against President Donald Trump, White House press secretary Sarah Sanders, the president's chief of staff John Kelly and the U.S. Secret Service, among others, over the suspension of Acosta's WHite House press credentials and demanded they be returned.
"The wrongful revocation of these credentials violates CNN and Acosta’s First Amendment rights of freedom of the press, and their Fifth Amendment rights to due process," CNN's communications team said in a press release.
In the complaint, filed in D.C. District Court, lawyers for CNN argued the "revocation of Acosta's credentials is only the beginning."
"This severe and unprecedented punishment is the culmination of years of hostility by President Trump against CNN and Acosta based on the contents of their reporting — an unabashed attempt to censor the press and exclude reporters from the White House who challenge and dispute the President’s point of view," CNN's lawyers wrote in the court documents.
The president "lacks the authority to quash" the First Amendment, the lawyers wrote, and access to the White House cannot be denied arbitrarily.
According to the lawsuit, CNN and Acosta aim to "enforce this constitutional commitment, restore Acosta’s well-deserved press credentials, and ensure that the press remains free to question the government and to report the business of the nation to the American people."
"This is just more grandstanding from CNN, and we will vigorously defend against this lawsuit, Sanders responded Tuesday. "CNN, who has nearly 50 additional hard pass holders, and Mr. Acosta is no more or less special than any other media outlet or reporter with respect to the First Amendment," Sanders said in a statement. "After Mr. Acosta asked the President two questions—each of which the President answered—he physically refused to surrender a White House microphone to an intern, so that other reporters might ask their questions. This was not the first time this reporter has inappropriately refused to yield to other reporters." "The White House cannot run an orderly and fair press conference when a reporter acts this way, which is neither appropriate nor professional," Sanders continued. "The First Amendment is not served when a single reporter, of more than 150 present, attempts to monopolize the floor. If there is no check on this type of behavior it impedes the ability of the President, the White House staff, and members of the media to conduct business.”
White House Correspondents' Association President Olivier Knox issued a statement supporting CNN's legal move, saying the White House should not have taken away Acosta's credentials in the first place.
"Revoking access to the White House complex amounted to disproportionate reaction to the events of last Wednesday. We continue to urge the Administration to reverse course and fully reinstate CNN’s correspondent. The President of the United States should not be in the business of arbitrarily picking the men and women who cover him," Knox said.
The White House suspended press access for Acosta after he and Trump engaged in a heated exchange during a press conference on Wednesday, one day after the midterm elections.

Acosta began by asking about a caravan of people from Central America the president spoke of frequently before the midterm election.
"Honestly, I think you should let me run the country, you run CNN, and if you did it well, your ratings would be much better," Trump told Acosta.
Acosta then asked the president a question about the Russia investigation. After a back-and-forth, the president responded: "That's enough." A White House intern attempted to take the microphone from Acosta, who kept a firm grip and, while gesticulating, his arm came into contact with the intern's arm, according to video of the exchange.
“Pardon me, ma’am,” Acosta told the intern during the encounter.

In contentious exchange on migrant caravan, Russian investigation, Pres. Trump tells CNN's Jim Acosta, "I think you should let me run the country, you run CNN…Put down the mic."
Acosta's colleague defended him: "He's a diligent reporter." https://t.co/QF15MHrJt2 pic.twitter.com/6B1H7CDfVz

“I tell you what. CNN should be ashamed of itself, having you working for them,” Trump said at the news conference. “You are a rude, terrible person. You shouldn’t be working for CNN.”
When Acosta returned to the White House later that evening, the Secret Service barred him from entering and took his credentials.
In a statement, Sanders said Acosta was banned from the grounds because he placed "his hands on" a White House intern during the press conference in the East Wing earlier in the day.
"President Trump believes in a free press and expects and welcomes tough questions of him and his Administration," Sanders said. "We will, however, never tolerate a reporter placing his hands on a young woman just trying to do her job as a White House intern."
CNN quickly and plainly called Sanders' explanation a lie. "She provided fraudulent accusations and cited an incident that never happened," CNN said in a statement.
Many journalists came to Acosta's defense, calling the suspension of his credentials a "very bad sign" stemming from a fear of tough questioning, and tweeting photos of the exchange.
Read the full complaint here.
Copyright © 2018, ABC Radio. All rights reserved.