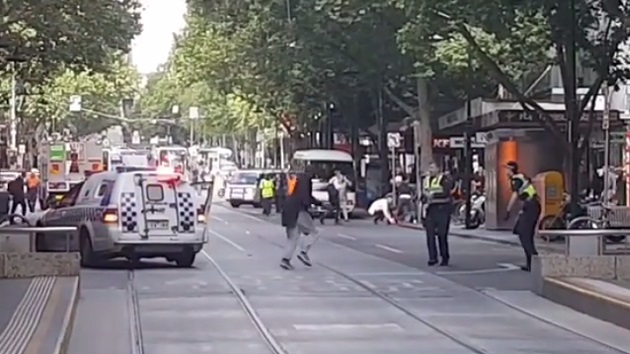 Instagram/@nohsoohyun86(MELBOURNE, Australia) — Tens of thousands of dollars have been raised for a homeless man in Melbourne, Australia, after a video showed his attempt to help police officers during a violent attack last week by running towards a knife-wielding man with a shopping cart.
The man, who has been identified as Melbourne resident Michael Rogers, 46, was widely praised in the media, earning the nickname "Trolley Man" in the Australian press.
On Nov. 9, Shire Ali, 30, allegedly set a car on fire on Bourke Street in Melbourne, and stabbed three people, one fatally.
Rogers intervened by pushing a shopping cart towards the suspect, who was then shot by police. Ali later died in hospital.
Authorities described the attack as an “act of terrorism.”
On Nov. 10, Donna Stolzenberg, the founder and managing director for the Melbourne Homeless Collective charity, set up a GoFundMe page for Rogers with the aim of raising $45,000 Australian dollars ($32,406 in U.S. dollars), but a flurry of donations has nearly tripled that goal. Over $120,000 Australian dollars ($86,500 U.S. dollars) has been raised as of Monday, and payments are still flooding in.
Stolzenberg wrote on the page, subtitled “Thank you Trolleyman,” that Rogers’ efforts “deserve a reward” and all donated funds from GoFundMe would go directly to Rogers to help “get him back on his feet.”
“He risked his own life that day for nothing in return and you can’t put a price on that,” she added.
Footage of the attack shared on social media by an Instagram user shows Rogers charging towards the knife-wielding man using a supermarket trolley.
In an interview with the Australian newspaper The Age, Rogers revealed that he was homeless for a number of reasons, including a history of drug abuse and having spent time in prison.
“I just wanted to help and do something right for the first time in me life,” he said. “It was a spur of the moment.”
Rogers had been rolling a cigarette nearby when the attack began. “The car stopped and I heard a lot of yelling and screaming,” he told The Age newspaper.
“Initially I thought it was the driver and the occupants fighting. But when I saw people running and screaming I realized it was something a bit more than an argument.”
Stolzenberg updated the crowdfunding page on Monday to say that the charity would meet with Rogers later this week to give him the donated money.
Copyright © 2018, ABC Radio. All rights reserved.