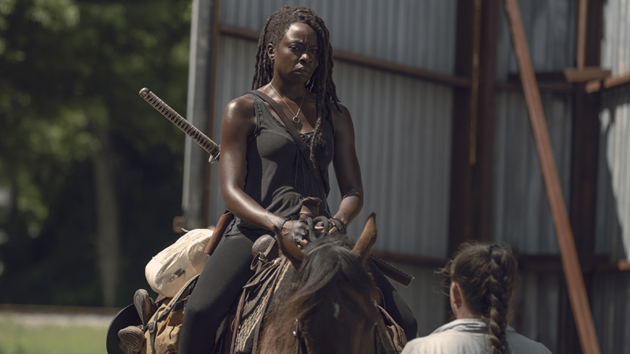 Gene Page/AMC(NEW YORK) — Sunday's episode of The Walking Dead reinforced the shocker at the end of last week's show: that years have passed since Rick vanished and was presumed dead.

Michonne still mourning Rick, she speaks to his memory, as if praying.

Daryl wakes up in a run-down tent and kills a fish with a spear — before killing a walker with the same stick.

Next, we see Carol, her famously short hair has grown to her shoulders. She looks happy, waking up next to Ezekiel, who's sleeping in, in the Kingdom.

Scavenging, Michonne finds an abandoned van and a cigar box full of trinkets, including a little cowboy toy that looks like Rick. Little bits of life offer hope, she voices over — like a bird that plucks a worm from a walker to feed its babies.

She hasn't given up hope, she explains to Rick's memory. "For you."

Aaron, Rosita, and Eugene look for Judith, who returns with the newbies she rescued. We see Eugene of all people, stepping up and killing a few walkers.

Judith insists they take the new people with them to Alexandria, against the others' protests.

Back at Kingdom, Young — not so young, anymore — Henry has apparently been adopted as Ezekiel's son, with Carol his surrogate, if not slightly reluctant mom.

The new survivors can't believe how civilized Alexandria is; the natives are nervous about the newbs.

Michonne rides in, and wants to know why the rules were broken to bring them in. She insists they stay in a holding pen until a council can vet them.

Henry leaves the Kingdom to go someplace with Carol. His "dad" sees them off.

The folks go before the council, which includes Fr. Gabriel, Aaron, Michonne as the head of security, and Sidiq the doctor; the newcomers plead their cases as to why they should stay.

Michonne spots a prison tattoo on Magna, one of the newcomers, who insists she's got nothing to hide. Michonne knows she's hiding a knife. Magna is, in her belt buckle. The newcomer exposed, Michonne storms off.

Later, Father Gabriel and Rosita discuss Michonne, hoping she'll change her mind. They plot boosting their radio signal to try to find others. Then she kisses him. Times have certainly changed.

Michonne is talking to herself, but really to Rick; Judith spies on her doing so.

As Henry and Carol travel by wagon, he hears a woman screaming. Carol protests but he streaks away, only to be hoodwinked…It's a trap. Carol tries to save him, but a door opens to reveal Jed and his band of Saviors that left Rick's gang years ago.

They hijack the good guys' gear.

Because Carol spared him back in the day, Jed explains, he offers to let them live — but asks for her engagement ring. Henry takes offense; lifts his staff up and hits Jed with it; Henry gets whomped, but Carol throws herself on him, and hands over the ring.

At Alexandria, Judith is doing math homework, with the help of Negan through his jail window. He's looking far better than when we last saw him. They joust a little, with Negan wondering why a word problem about an airplane leaving at particular times should concern her, seeing as there are no airplanes anymore.

Elsewhere, young Henry asks his mom why she gave up so easily, noting how much of a fighter she used to be.

Meanwhile, Eugene and Rosita work on their radio relay, when Eugene spots an approaching herd from the top of a water tower. He tries to high tail it off the ladder, but drops his gear. It makes a loud enough bang that their horses scatter. A portion of the ladder falls off, and he leaps, hurting his knee.

In holding, the newbies debate what they should do: the girl who had the knife, Magna, wants to fight the only impediment to staying in Alexandria: Michonne.

Elsewhere, a woman walks in the dark and puts down a gas can. She plucks the match from a sleeping Jed's mouth.

He wakes. "The ring I could have given you," Carol says, match in hand. But that stuff you took belongs to people I knew. People who aren't here anymore."

"I know," Carol says, lighting the match and setting the whole barn full of Savior outcasts on fire, burning them alive. Warrior Carol is back.

Meanwhile, at Alexandria, Magna tries sneaking into Michonne's home, knife in hand. Seeing Michonne with a little kid — apparently hers with Rick, another shocker — she thinks differently. Magna knocks on the door and hands over her folding knife. "You missed one," she says, before affirming that Michonne was right about her, that she's done terrible things. "We've all done things," Michonne admits.

Meanwhile, Rosita and a hobbled Eugene try to flee the approaching horde.

Back on the road, young Henry apologizes for implying his mother was weak. Then he spots the ring that's back on his finger, and he understands. They're apparently heading to a place off the map. Then they spot Daryl. "Need a ride, stranger?" she smiles.

We see Michonne dressing herself in Rick's old shirt, taking comfort in it.

Meanwhile, the newbies bid Alexandria a farewell, but just then, Michonne announces a change of plans. They're taking the group to the Hilltop colony.

Rosita and Eugene scramble to a muddy riverbank, walkers in pursuit. The humans cover themselves in mud to mask their scent. And we hear, for the first time, a walker talking to the others, rasping, "They must be close. Don't let them get away!"