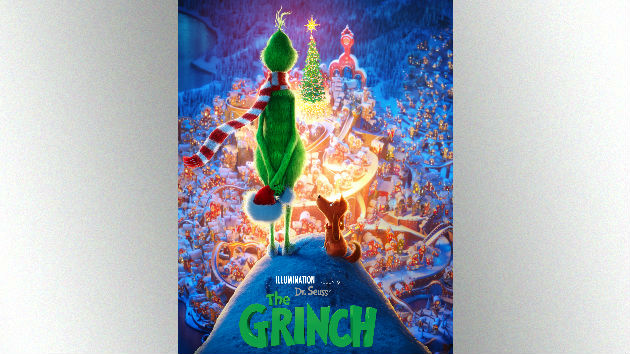 Universal(LOS ANGELES) — The Grinch brought in the green this weekend, topping the box office with an estimated $66 million debut. The CGI-animated take on Dr. Seuss' classic 1957 book, How the Grinch Stole Christmas — with Benedict Cumberbatch voicing the titular character — posted the third biggest opening for an animated film in November, behind The Incredibles and Frozen, with $70.4 million $67.39 million, respectively.

Internationally, the film earned an estimated $12.7 million overseas, for a total of $78.7 million worldwide as of Sunday night.

Last week's top film, Bohemian Rhapsody, landed at number two in its second week of release, delivering an estimated $30.85 million. That brings its stateside totals to over $100 million, which added to its estimated $63 million internationally, for a global tally of more than $185 million.

It's not until third place that we find the second of this week's new major releases, the J.J Abrams horror film Overlord, with an estimated $10.1 million.

In the fourth position was Disney's The Nutcracker and the Four Realms, delivering an estimated $9.56 million and bringing its totals here in the states to over $35 million. Outside the U.S., the film picked up an estimated $13.5 million, for a total of $96.7 million worldwide .

The Girl in the Spider's Web — the third of this week's new major releases — starring Claire Foy — rounded out the top five with an estimated $8 million.

The Front Runner, starring Hugh Jackman opened in four theaters last Tuesday and earned $56,000. It expands to 48 locations next week.