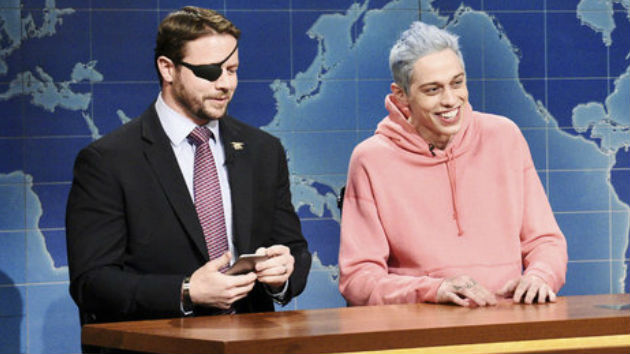 NBC/Will Heath(NEW YORK) — Pete Davidson apologized — in person — to Lt. Cmdr. Dan Crenshaw during Saturday Night Live’s "Weekend Update" segment, one week after joking about the candidate's eye patch. "On behalf of me and the show, I apologize," Davidson said.

Davidson joked about Crenshaw, a veteran of the war in Afghanistan, during a segment on "Weekend Update" last week. Davidson showed photos of various candidates for the midterm elections, including one of Crenshaw.

Crenshaw, a former Navy SEAL, lost his right eye when an IED exploded during a tour of Afghanistan in 2012. After he recovered from his injury, he returned to duty minus the injured eye. He earned two Bronze Stars and a Purple Heart during his military career — and he just won his congressional race.

"Thank you so much for coming," Davidson said.

"Thank you for making a Republican look good," Crenshaw responded.

On Saturday's show, Crenshaw's phone began ringing with the Ariana Grande song "Breathin." Davidson, of course, recently broke up with the pop star after getting engaged earlier this year.

"Do you know her?" Crenshaw asked.

Crenshaw then cut a few jokes about Davidson's appearance, including that he looked like, "a troll doll with a tapeworm."

He closed by asking Americans to forgive one another and to tell a veteran "never forget." He also thanked Davidson's father — a firefighter who died on September 11 — for his sacrifice.

Miley Cyrus to ring in 2022 alongside Pete Davidson in NBC’s New Year’s Eve special
Disney gives sneak peek of its upcoming ‘Star Wars’: Galactic Starcruiser interactive hotel
‘West Side Story’ star Rita Moreno on the advice she shared with new star Ariana DeBose
Hailee Steinfeld on her two Marvel characters, and why she was Kevin Feige’s “dream” star for ‘Hawkeye’
Iman Shumpert becomes first NBA star in history to win ‘Dancing with the Stars’
‘Shang-Chi and the Legend of the Ten Rings’ star Simi Liu gets revenge on young critic: “I’m Shang-Chi b****!”