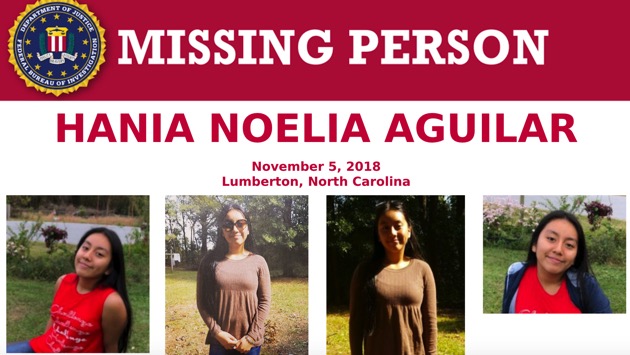 FBI(LUMBERTON, N.C.) — It's been one week since a 13-year-old girl was kidnapped in front of her North Carolina home before school.
Now, investigators' pleas for more information grow "more and more urgent by the minute," according to FBI spokeswoman Shelley Lynch.
Eighth-grader Hania Noleia Aguilar was kidnapped just before 7 a.m. on Nov. 5 at the Rosewood Mobile Home park in Lumberton, said Lumberton Police Chief Michael McNeil.
Hania had walked outside with her aunt's car keys when a family member saw a man dressed in all black with a yellow bandanna over his face approach the teen and force her into the SUV, police said.
The suspect then stole the vehicle and drove away with Hania, police said. The car was recovered Thursday on Quincey Drive in Lumberton.
FBI agents are now looking to speak with everyone who lives near the mobile home park or on the road where the SUV was found.
Investigators have also released surveillance footage of a man they'd like to speak to in connection with the search.
The man was seen wearing light-colored shoes, a light-colored shirt and a hoodie walking south on Lambath Road before making a left on Highway 41 toward the trailer park Monday morning, FBI supervisor Andy de la Rocha told reporters last week. The man was the only person seen walking in the neighborhood in that part of the day, De la Rocha said.
“Someone knows this man and we need you to call us," De la Rocha said in a statement. "Maybe you recognize the way he walks, his mannerisms, or maybe he will recognize himself on TV. The public was critical in the recovery of the SUV, now we need you to come through again for us."
The FBI has also requested surveillance footage from residents and local business owners so investigators can construct a detailed timeline of when and how the stolen SUV was abandoned.
The FBI is offering a $15,000 reward and the North Carolina governor’s office is offering an additional $5,000 reward.
Copyright © 2018, ABC Radio. All rights reserved.

Search effort underway for missing LSU student whose car was found on Mississippi River bridge
Associate of Matt Gaetz could cooperate with probe as part of plea deal, say prosecutors
“Black Adam ready”: The Rock says DC superhero pic prod starts this week, and proves he doesn’t skip leg day
Steve Harvey reflects on Miss Universe snafu: “It was the worst week of my life”
COVID-19 origins: What to know about the search for the start of the virus
Key takeaways from 1st week of Derek Chauvin trial in the death of George Floyd