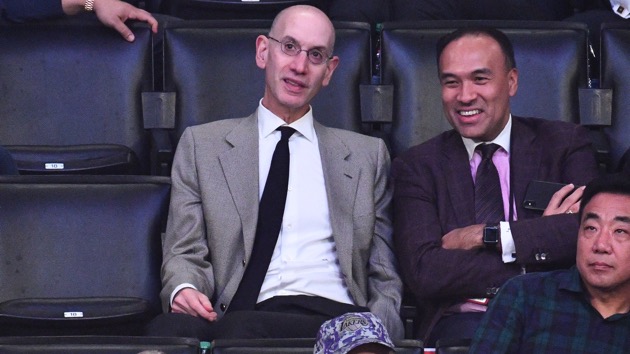 Allen Berezovsky/Getty Images(LOS ANGELES) — NBA teams are honoring the victims of the nation's latest mass shooting, and the league commissioner Adam Silver is standing behind them. Silver showed his support from the stands Sunday as the Los Angeles Lakers and Atlanta Hawks acknowledged the victims of the Thousand Oaks, Calif., shooting by wearing t-shirts that displayed the message "Enough," according to ESPN.
Silver told ESPN after Sunday's game — the Lakers' first game since the Wednesday night shooting — that "players aren't just ballplayers, they're citizens."
"They have strong feelings about what's happening in society and they react to them," he said. "I think this was something that was a groundswell within the league. It came from the players and it spread by word of mouth from one team to another."
Silver explained that the tributes began in California, but spread when other teams joined to show their support. The Lakers and the Hawks chose to don the "Enough" shirts after the players from the Clippers and Milwaukee Bucks first wore the shirts at their game Saturday, ESPN reports. The Clippers and the Bucks first wore the shirts after the Clippers noticed the Los Angeles Kings and Minnosota Wild wearing "Enough" decals at a hockey game Thursday.
The names of the 12 people killed in the shooting at the Borderline Bar & Grill in Thousand Oaks also appear on the shirt worn by the NBA players.
"Again, I support our players' desire to speak out on issues that are important to them and important to society," Silver told ESPN.
The Lakers beat the Hawks 107-106 on Sunday.
Copyright © 2018, ABC Radio. All rights reserved.